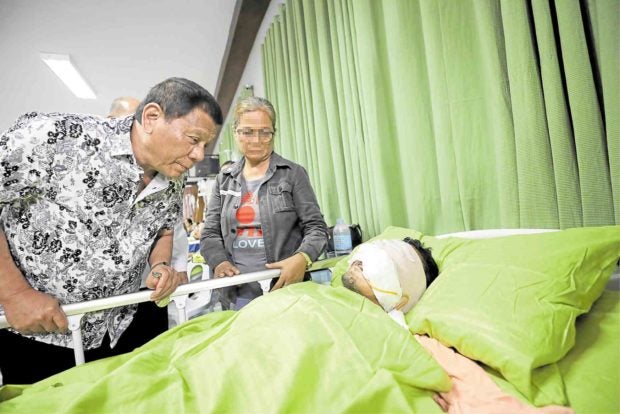 President Rodrigo Duterte posthumously conferred the Order of Lapu-Lapu, Rank of Kalasag, on six Army soldiers who were killed in an encounter with communist insurgents in Borongan, Eastern Samar.

Mr. Duterte visited the soldiers’ wake in Catbalogan City on Friday and condoled with their families, according to a Malacañang statement.

The dependents of the slain soldiers received financial assistance from the government, as well as help from the state’s Comprehensive Social Benefit Program.

Thank you for your service

The Order of Lapu-Lapu is confered on persons in the government or private sector who have rendered extraordinary service or have made exceptional contributions to the success of the President’s campaign or advocacy.

The Kalasag Medal is given to officials and personnel of the government and private individuals who lost their lives as a direct result of their participation in an activity pursuant to a campaign or advocacy of the President.

Another 24 soldiers were wounded in the Nov. 11 Borongan clash.

Mr. Duterte conferred the Order of Lapu-Lapu, Rank of Kampilan, on 16 of the wounded soldiers who were confined at Camp Lukban Station Hospital.

He also gave the same honor to critically injured soldiers and police personnel involved in the Borongan encounter who were confined at the Divine Word Hospital in Tacloban City.

The Order of Lapu-Lapu was also given to four soldiers injured in separate clashes with members of the New People’s Army.

The Kampilan Medal is conferred on persons who were seriously wounded or suffered great loss of property as a direct result of their participation in an activity pursuant to the President’s campaign or advocacy.