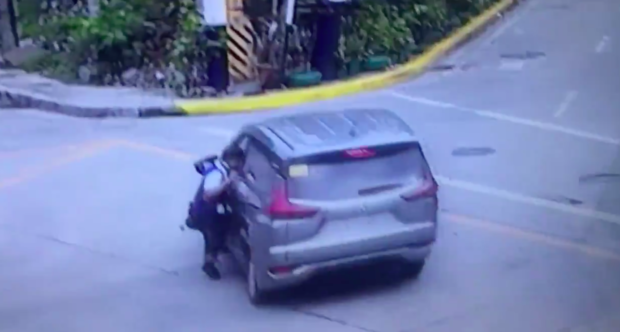 Screenshot of the fast moving Mitsubishi Xpander while Manila Traffic enforcer Adrian Lim was seen clinging on the side of the vehicle. Video from the Twitter account of the Manila Public Information Office

MANILA, Philippines — A traffic enforcer assigned at the Manila Traffic and Parking Bureau (MTPB) was injured after hanging on the window of the car of an alleged reckless driver he was accosting in Manila on Saturday morning.

In a CCTV footage obtained by the Manila Public Information Office, MTPB enforcer Adrian Lim was spotted hanging on for dear life at the driver’s side of a fast moving Mitsubishi Xpander driven by a certain Orlando Ricardo Jr.

In the process, the driver hit a car parked on the side of the street, and after which he backed up the car before speeding off again, as if trying to shake off the traffic enforcer.

Lim eventually lost grip and fell from the vehicle along Gelinos Street near Laong-Laan Road.

Ricardo was detained at the Manila Police District Station 3 and will be charged for serious physical injury and hit and run.