Ousted ambassador ‘shocked’ at Trump; he assails her anew 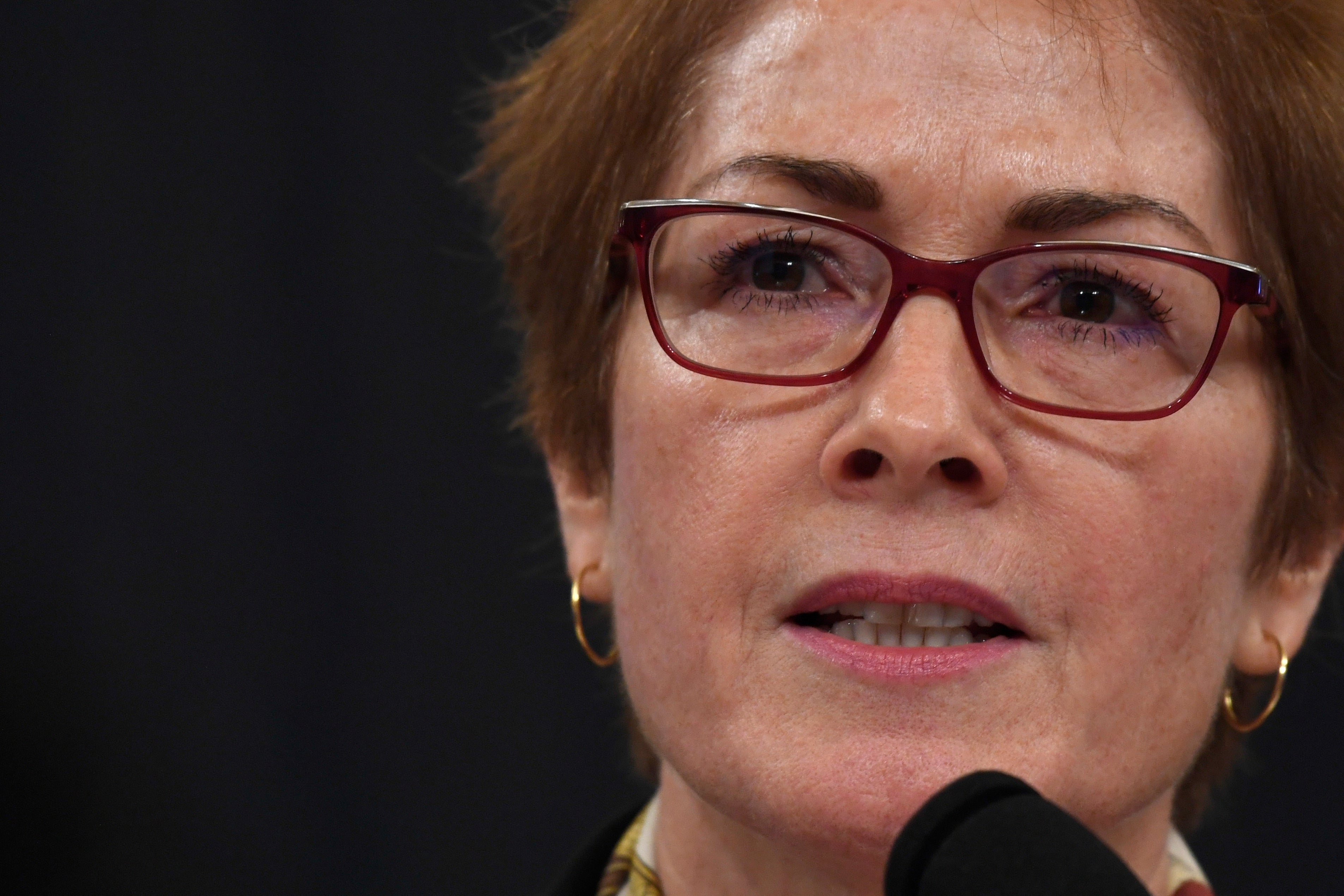 WASHINGTON  — In chilling detail, ousted U.S. Ukraine Ambassador Marie Yovanovitch described to Trump impeachment investigators Friday how she felt threatened upon learning that President Donald Trump had promised Ukraine’s leader she was “going to go through some things.”

Unwilling to stay silent during Yovanovitch’s testimony, Trump focused even greater national attention on the House hearing by becoming a participant. He tweeted fresh criticism of her, saying that things “turned bad” everywhere she served before he fired her — a comment that quickly was displayed on a video screen in the hearing room.

Rather than distract from the career diplomat’s testimony, Trump’s interference could provide more evidence against him in the probe. Democrat Adam Schiff, chairman of the House Intelligence Committee, said Trump’s attacks were “part of a patter to obstruct justice” and

could be part of an article of impeachment.

Asked about the potential effect of a presidential threat on other officials or witnesses, Yovanovitch replied, “Well, it’s very intimidating.”

When she saw in print what the president had said about her, she said, a friend told her all the color drained from her face. She was “shocked, appalled, devastated” at what was happening after a distinguished 30-year career in the U.S. Foreign Service.

Unabashed, Trump said when asked about it later, “I have the right to speak. I have freedom of speech.”

But not all Republicans thought it was wise. Rep. Liz Cheney of Wyoming said Trump’s live tweeting at the ambassador was wrong. She said, “I don’t think the president should have done that.”

The former ambassador was testifying on the second day of public impeachment hearings, just the fourth time in American history that the House of Representatives has launched such proceedings. The investigation centers on whether Trump’s push for Ukrainian officials to investigate his political rivals amounted to an abuse of power, a charge he and Republicans vigorously deny.

Yovanovitch, a career diplomat who served for decades under both Republican and Democratic presidents and was first appointed by Ronald Reagan, was pushed from her post in Kyiv earlier this year amid intense criticism from Trump allies.

During a long day of testimony, she relayed her striking story of being “kneecapped,” recalled from Kyiv by Trump in a swiftly developing series of events that sounded alarms about a White House shadow foreign policy.

She described a “smear campaign” against her by Trump’s personal lawyer, Rudy Giuliani, and others, including the president’s son, Donald Trump Jr., before her firing.

The daughter of immigrants who fled the former Soviet Union and Nazi Germany, her career included three tours as an ambassador to some of the world’s tougher postings, before arriving in Ukraine in 2016. She was forced out last May.

In particular, Yovanovitch described Giuliani, Trump’s lawyer, as leading what William Taylor, now the top diplomat in Ukraine who testified earlier in the inquiry, called an “irregular channel” outside the diplomatic mainstream of U.S.-Ukraine relations.

“These events should concern everyone in this room,” Yovanovitch testified in opening remarks.

She said her sudden removal had played into the hands of “shady interests the world over” with dangerous intentions toward the United States. They have learned, she said, “how little it takes to remove an American ambassador who does not give them what they want.”

After Trump’s tweets pulled attention away from her statement, Schiff read the president’s comments aloud, said that “as we sit here testifying, the president is attacking you on Twitter,” and asked if that was a tactic to intimidate.

“I can’t speak to what the president is trying to do, but I think the effect is to be intimidated,” she said.

Said Schiff, “Well, I want to let you know, Ambassador, that some of us here take witness intimidation very, very seriously.”

Later Friday, the panel in closed-door session heard from David Holmes, a political adviser in Kyiv, who overheard Trump asking about the investigations the day after the president’s July 25 phone conversation with new Ukrainian President Volodymyr Zelenskiy. Holmes was at dinner with Gordon Sondland, the ambassador to the European Union, when Sondland called up Trump. The conversation was apparently loud enough to be overheard.

In Trump’s phone call with Zelenskiy, he asked for a “favor,” according to an account provided by the White House. He wanted an investigation of Democrats and 2020 rival Joe Biden. Later it was revealed that the administration was withholding military aid from Ukraine at the time.

Democrats are relying on the testimony of officials close to the Ukraine matter to make their case as they consider whether the president’s behavior was impeachable.

Yovanovitch provides a key element, Schiff said, as someone whom Trump and Giuliani wanted out of the way for others more favorable to their interests in Ukraine, an energy-rich country that has long struggled with corruption.

It became clear, he said, “President Trump wanted her gone.”

The top Republican on the panel, Rep. Devin Nunes of California, bemoaned the hearings as a “daylong TV spectacle.”

Republicans complained that the ambassador, like other witnesses, can offer only hearsay testimony and only knows of Trump’s actions secondhand. They note that Yovanovitch had left her position before the July phone call.

Nunes also pressed to hear from the still anonymous government whistleblower who first alerted officials about Trump’s phone call with Ukraine that is in question. “These hearings should not be occurring at all,” he said.

Just as the hearing was opening, the White House released its rough transcript of a still-earlier Trump call with Zelenskiy that was largely congratulatory.

Nunes read that transcript aloud. In it, Trump mentioned his experience with the Miss Universe pageant in Ukraine and invited Zelenskiy to the White House. He closed with, “See you very soon.”

Under questioning from Republicans, Yovanovitch acknowledged that Joe Biden’s son, Hunter, serving on the board of a gas company in Ukraine could have created the appearance of a conflict of interest. But she testified the former vice president acted in accordance with official U.S. policy.

She denied allegations against her, including that she favored Democrat Hillary Clinton over Trump in the 2016 election, and she rejected the notion that Ukraine tried to interfere in the election, as Trump claims, counter to mainstream U.S. intelligence findings that it was Russia.

The White House has instructed officials not to comply with the probe, and most have been issued subpoenas to appear.

An administration budget official will meet privately with the panel privately Saturday. Part of the impeachment inquiry concerns the contention that military aid for Ukraine, which borders a hostile Russia, was being withheld through the White House budget office, pending Ukrainian agreement to investigate Biden and the 2016 U.S. election.