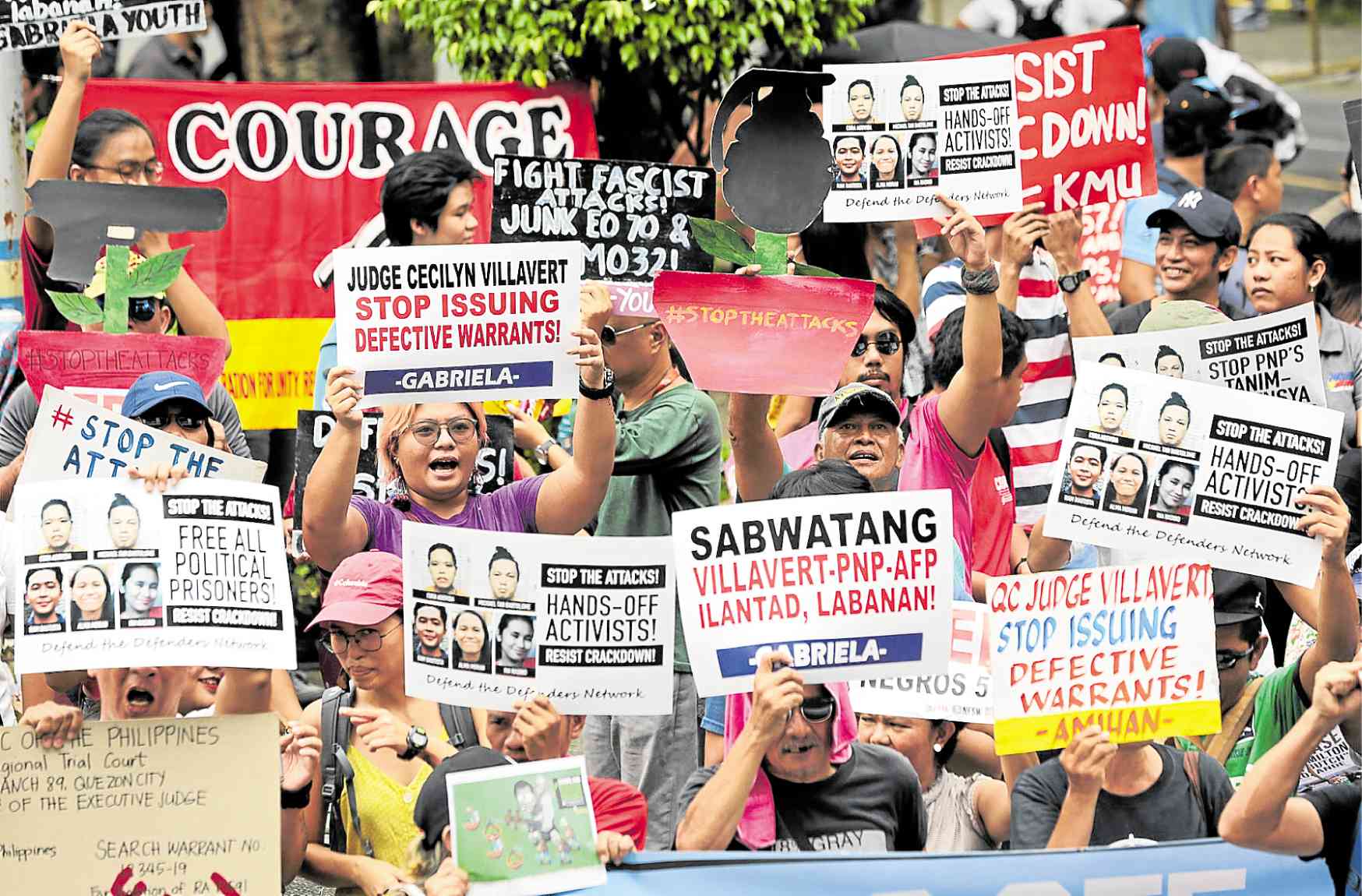 PROTEST VS QC COURT Karapatan and other activist groups troop to the Quezon City Hall of Justice on Nov. 6 to denounce the warrants authorizing a search on their offices. —GRIG C. MONTEGRANDE

The Philippine National Police  in Cagayan de Oro City drew flak for barging on Wednesday into the premises of nongovernmental organization Balay Mindanaw without a warrant.

Charlito Manlupig, founder and president of Balay Mindanaw Foundation Inc. (BMFI) said two police officers, who came with a K9 dog, searched the bags of young volunteers from Marawi City who were about to complete a two-day training on dealing with trauma.

The bags were placed at the lobby of BMFI’s peace center, where trainings are hosted, after the volunteers checked out of their rooms.

Manlupig said the policemen, who were members of the Cagayan de Oro Special Weapons and Tactics (SWAT) team, did not introduce themselves nor present a search warrant to BMFI staff.

“The police officers conducted the search without saying any word. It traumatized all of our staff and the volunteers,” he said.

Police Maj. Aldren Baculio, chief of Bulua police station, said he personally went to BMFI to apologize for the incident, explaining this was a lapse in communication.

Cagayan de Oro police spokesperson Maj. Ivan Viñas also apologized for the incident, saying it was supposedly a routine procedure but “it created a misunderstanding.”

He explained that the PNP regional office in Camp Alagar ordered a SWAT team in Cagayan de Oro to conduct a search after the Australian Embassy in Manila informed them that one of their officials would visit Balay Mindanaw.

Manlupig, on the other hand, said, “From whom or where did the PNP get the information that we were expecting Australian dignitaries? We were expecting no one. Nobody, not even the Australian Embassy, informed us. We had hosted many dignitaries in the past, and we are familiar with security protocol.”

He said they would be filing a complaint against the two policemen.

“We now have a taste of martial law. Is Balay Mindanaw now considered a security threat? An enemy? Is there a deeper reason for the illegal search and trespassing?” Manlupig said.

The search at Balay Mindanaw came after the Philippine Army labeled international group Oxfam “a front organization” of the New People’s Army and other communist groups.

In Iloilo province, progressive groups anticipating possible raids and arrests invited the media as well as village officials and personnel of the Commission on Human Rights (CHR) to inspect their offices on Wednesday, to show they were not hiding firearms and explosives.

Officials of Bagong Alyansang Makabayan (Bayan)-Panay and human rights group Panay Alliance Karapatan opened boxes and cabinets, and allowed those invited to see the rooms and other spaces in their office at Door 2, Jardeleza Apartment on Cuartero Street, Barangay Fajardo, Jaro District in Iloilo City.

“We are showing even our trash cans just to prove that we are not hiding any firearms, grenades or other explosives. If there is a police raid and they found such things, then these will surely be planted,” Elmer Forro, Bayan-Panay secretary general, told the Inquirer.

Forro said their office is known to the community and the media and is not a safehouse of rebels.

He said they initiated the “open house” activities after offices of progressive organizations were raided by the police and military in Manila and in the cities of Bacolod and Escalante in Negros Occidental.

Forro said the raids were part of a “crackdown” on organizations and individuals critical of the Duterte administration because of extrajudicial killings in the drug war on the President’s watch, “Red-tagging” and the perceived effects of the rice tariffication law, among other issues.