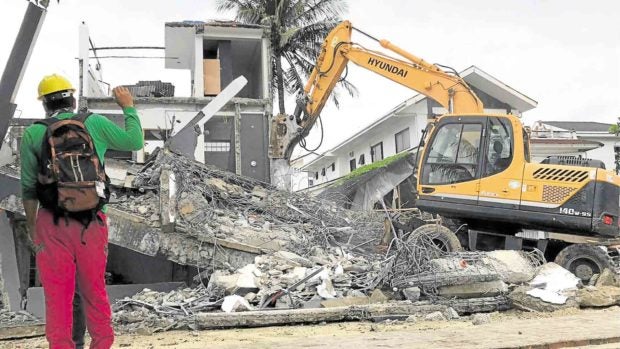 CLEARING Structures violating easement rules on Bulabog Beach in Boracay are demolished despite an appeal from residents towait for a court ruling on a related case. —CONTRIBUTED PHOTO

ILOILO CITY—Joyce Manahan and her family are at a loss as to where and how to live on Boracay Island after their house on Bulabog Beach, where they operate a rental business, was demolished on Thursday.

“We put all our savings in buying the lot and [constructing] the building. We also had not operated for nearly two years since the closure of the island,” she told the Inquirer.

Workers equipped with a hydraulic hammer continued tearing down her three-story building.

Another building hosting a kite-surfing shop and school owned by Khristopher Ken Nacor was demolished.

The government pursued the clearing of structures reportedly violating easement rules after a temporary restraining order expired and while a local court had yet to issue another directive.

The demolition also went on despite the appeal of residents and property owners to authorities, including President Duterte.

“We don’t know what to do. How can we rebuild? All our savings have been used up in our investment and in staying afloat during the closure of the island,” Manahan said, referring to the period when the island was closed to tourists for six months last year to pave the way for its rehabilitation.

Manahan and her partner, Andrew William Sawyer, and their two daughters, age 13 and 6, were temporarily staying at a resort owned by a friend. Their belongings were transferred last week to their neighbors’ houses when the demolition started.

The Boracay Inter-Agency Rehabilitation Management Group (BIARMG) is leading the demolition of 10 establishments on Bulabog Beach at the eastern side of the island parallel to the more popular White Beach, for allegedly encroaching on the 30-meter beach easement.

The residents and property owners are insisting that they are already complying with the rules. They have appealed to the local government of Malay town in Aklan and to the BIARMG to suspend the demolition for a few days until the regional trial court in Kalibo town has resolved their petition seeking for the issuance of a preliminary injunction.

They are asking President Duterte to intervene and stop the demolition.

“We humbly request for your intervention and we seek immediate action on the matter. President Duterte, we appreciate you are a very busy man, but we are just human beings—and we are hoping you can help us be treated as such by our own local government. We trust fully in your governance,” according to a Nov. 12 letter sent by email to the President by 15 residents and property owners.

Natividad Bernardino, BIARMG general manager, said there was no legal impediment to the demolition.

She said government agencies were also following a timetable to implement the rehabilitation activities as mandated by Mr. Duterte, citing a road project along the beach.

She said the property owners “were given more than a year and a half” to voluntarily demolish their structures.

“These 10 are the only ones which have not complied. The demolition shows that we are demolishing not just shanties and illegal settlers,” Bernardino said.

But Manahan said that in 2013, they were also told that part of their property was encroaching on the 30-m easement.

“We moved our cafe and a kite-surfing school and gave up around 200 square meters, or around half of our property, to be compliant. But last year, they told us again that we were noncompliant,” she said.

Manahan said she and her family were losing their three-story building. They live on the third floor while the first two floors are rented out to visitors.

“The President’s order is clear … Executive Order No. 53, Series of 2018, directs the rehabilitation of Boracay ‘in accordance with law.’ They (local officials) shouldn’t thus use the President as a shield for clearly illegal activities, such as demolition of [property] without due process,” Panelo said in a statement.

Bernardino said the beach area was being cleared for a road project that would connect the island’s circumferential road.

The Malay municipal council had earlier opposed the road project along Bulabog Beach.

In a resolution on Feb. 26 this year, the council asked the Boracay Inter-Agency Task Force, the Department of Public Works and Highways and the Aklan provincial government to put up a boardwalk or walkway instead of a concrete road.