A firefighter left a heartwarming note in a man’s home after saving it from the bushfires that recently affected the state of New South Wales in Australia.

Paul Sekfy found the note on his kitchen bench after returning to his house last Friday, Nov. 8, as per Nine News yesterday, Nov. 12.

Sekfy posted the note written by firefighters from the Uranga Rural Fire Service on his Facebook page on Saturday, Nov. 9.

“The best note on my kitchen bench since the morning after my wedding,” he said in jest.

The note read: “It was a pleasure to save your house. Sorry we that we could not save your sheds,” the note read. P.S. – we owe you some milk.”

Sekfy’s post quickly circulated online, already with over 5,000 shares as of this writing. It later managed to reach one Kale Hardie-Porter, the firefighter who left the note.

“Hi Paul Sekfy you have made my day!” the firefighter said. “[I’m] happy to know that my note got to you in one [piece] (knowing that the house survived once we had to leave).”

“Our crew of 4 did the best we could with what we had but unfortunately your two sheds didn’t last a second. We took refuge in your house for a moment and that’s when we discovered the fridge,” he explained. 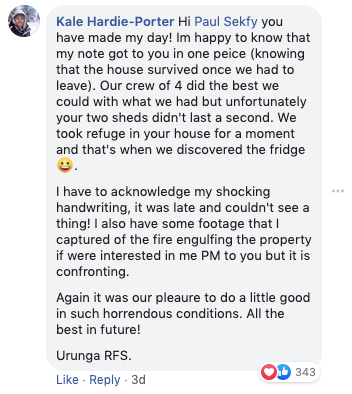 Hardie-Porter also explained his “shocking handwriting,” saying it was “late and [he] couldn’t see a thing!” He also offered to send Sekfy footage of the flames engulfing his home, but he noted that it was “confronting.”

“Again it was our [pleasure] to do a little good in such horrendous conditions,” the firefighter said. “All the best in future!”

Despite Sekfy’s home being saved from the flames, he noted that it was still uninhabitable, as per report.

“We have no power, no poles, no water, all dirty, and just too smoky for the next week,” he was quoted as saying. “It got big quickly and then seemed to come from everywhere.” Ryan Arcadio/JB