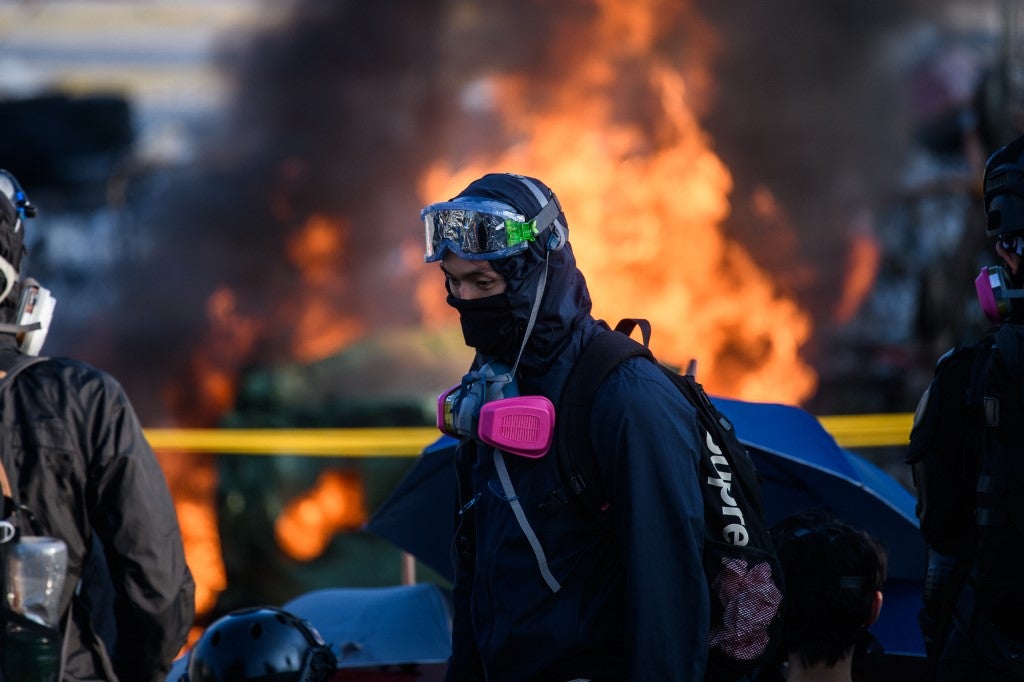 Protesters stand in front of a burning barricade at the Chinese University of Hong Kong (CUHK), in Hong Kong early on November 13, 2019. (Photo by Anthony WALLACE / AFP)

HONG KONG, China — Pro-democracy protesters stepped up Wednesday a “blossom everywhere” campaign of road blocks and vandalism across Hong Kong that has crippled the international financial hub this week and ignited some of the worst violence in five months of unrest.

The new phase in the crisis, which has forced schools and shopping malls to close as well as the shutdown of large chunks of the vital train network, prompted police to warn on Tuesday the city was “on the brink of total collapse”.

China, facing the biggest challenge to its rule of the territory since it was handed back by the British in 1997, has insisted it will not buckle to the pressure and warned of tougher security measures.

On Wednesday, commuters across many parts of the city woke to the increasingly familiar scenario of roads choked with bricks, bicycles, couches and other materials that had been laid out by the protesters overnight to block traffic.

Various lines on the subway, used by more than half of the city’s 7.5 million people daily, were also suspended due to vandalism, forcing many workers to stay at home.

Meanwhile, masked protesters dressed in their signature black were locked in a series of tense standoffs at university campuses following battles on Tuesday that continued through the night with police firing tear gas and rubber bullets.

The chaos was part of the largely anonymous protest movement’s new strategy of “blossom everywhere”, in which small groups of people target as many parts of the city as possible to cause maximum disruption and stretch police resources.

Protesters had until this week largely confined their actions to evenings and the weekends.

The campaign began with an effort to shut down the train network and enforce a city-wide strike on Monday.

The already tense atmosphere escalated on Monday when a police officer shot an unarmed 21-year-old protester, leaving him in a critical condition.

It was only the third confirmed time a police officer had shot someone with live bullets since the unrest began in June.

A masked person on Monday then doused a 57-year-old man, who had been arguing with protesters, with a flammable liquid and set him on fire. He was also hospitalised in a critical condition.

The protest movement has been fuelled by fears that China is choking the liberties and freedoms Hong Kong is meant to have under the terms of the handover deal with the British.

Protesters are demanding the right to freely elect their leaders.

But instead of offering concessions, China has responded with ominous warnings that it is prepared to further curb freedoms, and that it wants tougher security measures in Hong Kong.

On Tuesday the People’s Daily, the mouthpiece of China’s ruling Communist Party, warned that local district elections due to be held on November 24 may be cancelled if the protesters do not back down.

“Only by supporting the police force to decisively put down the riots can (Hong Kong) return to peace and hold fair elections, to help Hong Kong start again,” the commentary said.

Other powerful arms of the Chinese state media have also again raised the prospect this week of the Chinese military being deployed in Hong Kong to end the crisis.

Still, China is not yet prepared to take such drastic action as military intervention as it plays a longer game of weakening and intimidating the protest movement, according to Ben Bland, Sydney-based director of the Southeast Asia Project at the Lowy Institute, a policy think-tank.

“It still seems, as far as we can tell, that the most likely response is going to continue to be led by the Hong Kong authorities and the Hong Kong police,” Bland told AFP on Wednesday.

But the events this week have deepened concerns that Hong Kong’s police cannot solve the crisis, and that a political solution must be found.

The police force’s spokesman, Kong Wing-cheung, appeared to echo those fears on Tuesday.

“Hong Kong’s rule of law has been pushed to the brink of total collapse,” Kong said.