BAGHDAD – Iraq’s most powerful Shiite religious leader said Monday he backs a U.N. roadmap aimed at meeting the demands of anti-government protesters who have been rallying in recent weeks despite a bloody crackdown by security forces, but he expressed concern that political parties would not carry them out. 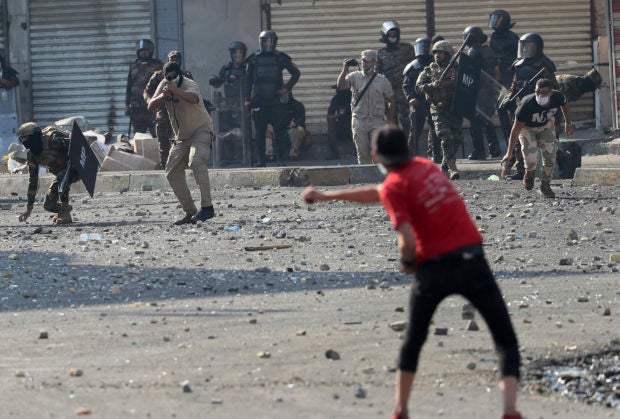 At least 12 protesters were wounded in new confrontations with security forces in and around central Baghdad’s Khilani Square. Most were hit directly with tear gas canisters, according to security and hospital officials who spoke on condition of anonymity in line with regulations.

Four others were killed overnight in clashes in a southern city, raising the death toll from the confrontations to 320 since the protests began last month.

Protesters ran for cover while police and security forces, some of them masked, fired the tear gas in daylong confrontations that engulfed the area in gray smoke.

Grand Ayatollah Ali al-Sistani said he welcomed the proposals announced by the U.N. in a bid to end the unrest, according to a statement from his office after meeting in the Shiite holy city of Najaf with Jeanine Hennis-Plasschaert, the U.N. special representative to Iraq.

But he said he was concerned that political parties “do not have sufficient seriousness to implement any true reform.” If they do not, he said, a “new approach” was needed.

“The situation cannot continue in the same way it has before the protests,” said al-Sistani, without elaborating.

As Iraq’s top Shiite cleric, the 89-year-old spiritual leader holds significant sway over public opinion and has intervened in previous times of crisis to wield influence over Iraqis.

In sermons since the unrest began Oct. 1, Sistani has sided largely with protesters, saying recently that security forces had a responsibility to show restraint with peaceful demonstrators.

So far, however, there has been no reaction by the government or leading politicians to the proposal put forward Sunday by the U.N. Assistance Mission in Iraq to address the protesters’ demands.

The plan calls for a series of ambitious short- and long-term measures focusing on electoral, security and constitutional reforms. The immediate steps include releasing peaceful demonstrators detained since early October, an investigation into cases of abduction, and punishment for those found guilty of using excessive force against protesters.

The roadmap also calls for the political elite to publicly declare their assets in Iraq and abroad, ban armed groups “outside state control” and set up a new electoral framework to be completed within the next two weeks.

Hennis-Plasschaert said the U.N. would monitor the government’s progress to ensure measures were being “done promptly, swiftly and decisively because this country needs to move forward.”

The demonstrators have demanded the removal of Iraq’s political leadership and complain of widespread corruption, lack of job opportunities and poor basic services, including regular power cuts, despite Iraq’s vast oil reserves.

Shiite politicians, meanwhile, denounced a statement Sunday by the White House that backed a previous call by Iraqi President Barham Saleh for the election system to be reformed and early elections to be held.

Qais al-Khazali, head of the powerful Iranian-backed Asaib al-Haq militia, said the statement showed “the extent of U.S. intervention in Iraq affairs” and that the idea of early elections was “primarily a U.S. project.”

Shiite cleric Muqtada al-Sadr, a nationalist whose supporters have the largest number of seats in parliament, warned in a tweet that if the U.S. “interferes one more time, this will be the end of its presence (in Iraq) through protests by millions of people with direct orders from us.”

Saleh said last month that early elections would be held following the resignation of Prime Minister Adil Abdul-Mahdi, who in turn said his stepping down was contingent on political parties finding a suitable alternative for the premiership. Abdul-Mahdi has stayed in his post since then.

Monday’s violence in Baghdad came after renewed clashes between demonstrators and security forces overnight in the southern city of Nasiriyah, killing four protesters and wounding about 130, a rights group said. The casualties came during confrontations outside the education directorate as security forces tear-gassed protesters trying to block employees from reaching the building in the city center.

The semi-official Iraqi High Commission for Human Rights, which reported the toll, called the violence “regrettable” and added that some of the wounded are in serious conditions. The group also said at least 34 demonstrators were arbitrarily arrested. /gsg