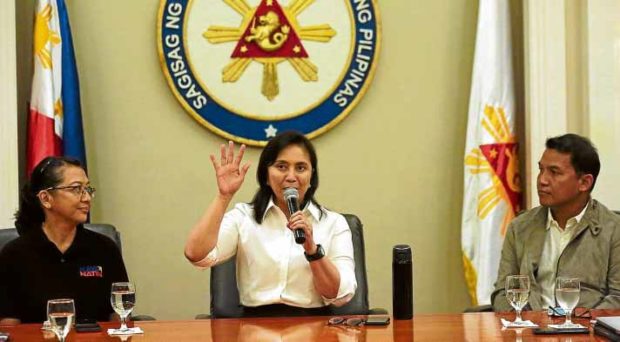 MANILA, Philippines — Malacañang is open to scrapping “Oplan: Tokhang,” a controversial strategy in President Rodrigo Duterte’s brutal war on drugs, if Vice President Leni Robredo has a more effective way of carrying out the crackdown on narcotics, the Palace said on Monday.

President Duterte will also give Robredo “everything” to help her fight illegal drugs, presidential spokesperson Salvador Panelo said, adding that the Vice President has “free rein” as cochair of the Inter-Agency Committee on Anti-Illegal Drugs.

Earlier, Robredo, who had accepted the President’s offer of a lead role in the crackdown on illegal drugs, said she wanted to get rid of tokhang, the police door-to-door campaign to flush out users that has cost the lives of more than 6,000 mostly poor people.

She said she wanted to replace tokhang with another, more effective campaign that would not lead to the killing of drug suspects.

“If that will be effective insofar as the drug war is concerned, she has been given the authority,” Panelo told a regular press briefing in the Palace on Monday.

“As long as VP Leni is in charge, whatever she feels should be enforced, we will do it. It’s a yes if she wants it,” Panelo said.

That sounded like slapping down Speaker Alan Peter Cayetano’s criticism on Monday that Oplan: Tokhang was turning to be Oplan: All-Talk under Robredo.

Cayetano’s remark drew a rebuke from Barry Gutierrez, a spokesperson for Robredo.

“[The Vice President] has just started [at] the job that was passed on to her by the President. She hasn’t even been there for a week,” Gutierrez said in a statement. “If Speaker Cayetano would not help out, he should at least avoid badmouthing [her].”

Gutierrez said Robredo would meet with the law enforcement cluster of the interagency committee on Thursday.

“We will have a clearer idea of the direction she plans to set by then,” he said.

Robredo agreed to lead the war on drugs last week, but had yet to sit down with the President for a discussion on the scope of her new job.

The Palace said the President would call her for a meeting, but did not say when.

Panelo said the President had committed to giving Robredo everything she would need to press the fight against illegal drugs, but that didn’t mean the President would keep his hands off the campaign.

“He is the President. He will be accountable for the whole nation. If she fails, then the President also fails,” Panelo said.

If Robredo asks for it, he said, the interagency committee will be given additional funding, and law enforcers will be given body cameras for transparency in operations.

“‘Whatever she needs, I will give it to her,’” he quoted President Duterte as saying. “We will give her all that she needs. She should be given a wide latitude and she should pursue her own scheme of things in pursuing the drug war initiated by this administration.”

He maintained that Robredo’s appointment is Cabinet rank, and no invitation is needed for her to attend Cabinet meetings.

Panelo also said the Palace would defer to Robredo if she wanted to meet with US and United Nations officials for discussions of improvements to the campaign against drugs.

“If she feels that America can help in the drug war … Americans have been helping us even before. Sharing intelligence is one of them. Maybe we should let VP Leni in her work,” he said.

But allowing foreign investigators who have already made conclusions about the drug war come into the country to investigate the government is a different matter, he said.

The International Criminal Court has opened a preliminary investigation of the killings in the President’s war on drugs and the United Nations Human Rights Council has approved an international probe into the drug deaths.

“The President doesn’t like that they already have conclusions even before coming here. The President wants them to be open-minded, objective, and just want to find out if the reports are true. That should be the approach. They should not have conclusions that we’re a murderous state,” Panelo said.

The Commission on Human Rights (CHR), meanwhile, expressed hope that with Robredo now leading the crackdown on narcotics, there would be more collaboration between the agency and the interagency committee on illegal drugs.

CHR spokesperson Jacqueline de Guia said the agency would write Robredo to request access to documents on the campaign, which would bolster the body’s investigation of rights cases related to the drug war.

She said the agency hoped Robredo’s appointment would lead to a shift in the approach to drugs from crime to health problem.

No need to join raids

There have been suggestions, including from Robredo’s cochair of the interagency committee, Philippine Drug Enforcement Agency chief Aaron Aquino, that she join drug raids.

But Lt. Gen. Archie Gamboa, the acting chief of the Philippine National Police, said on Monday that he did not see any point in Robredo joining such operations.

“As a matter of fact, we generals do not join anti-illegal drug operations probably because during our younger days we were exposed to this,” Gamboa said.

“It’s practically a new thing to her because she has not had exposure to this,” he said. “It would also risk her life.”

As for Robredo’s pledge to stop the killings in the drug war, Gamboa said: “[T]he PNP has not launched killing for purposes of enforcing anti-illegal drugs operations.”

Deaths in drug operations are investigated, he added.

The PNP admits more than 6,000 people have been killed by officers in operations since the launch of the drug war in 2016, but insists the suspects resisted arrest.

Rights groups, however, claim the figure could be as high as 20,000.