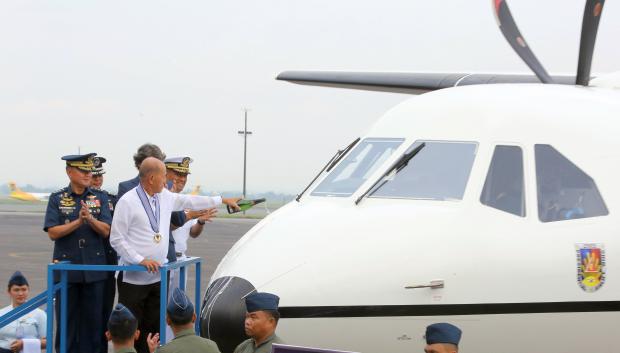 Defense Secretary Delfin Lorenzana led the turnover and blessing of a new C295M medium transport plane manufactured by Spain’s Airbus Defence and Space. The plane was delivered on Monday, Nov. 11, 2019. (Photo from the Philippine Air Force)

A handover and blessing ceremony was held at Clark Air Base in Pampanga with Defense Secretary Delfin Lorenzana as the guest of honor, said Air Force spokesperson Maj. Aristides Galang in a statement.

The P1.8-billion aircraft is part of the command-and-control fixed-wing turboprop acquisition project of the AFP’s modernization program. It is a new addition to the three operational C295 aircraft in the Air Force.

“From airlifting personnel and logistical supplies to projecting military force as well as providing humanitarian assistance and disaster response, air mobility has been an indispensable capability that the Philippine Air Force provides through the competency of our pilots, crew and the aircraft that we possess,” Air Force chief Lt. Gen. Rozzano Briguez was quoted as saying.

As photos suggest, the aircraft would be assigned to the 250th Presidential Airlift Wing, the unit which provides transportation to the President and VIPs.

But the plane would also be used for humanitarian assistance and disaster response operations, as well as transport of troops and equipment.

Galang said the first mission of the new aircraft would be to transport troops and relief goods to quake-hit areas in Mindanao.

The Air Force is expecting another command-and-control aircraft, the Gulfstream G280, by August next year.