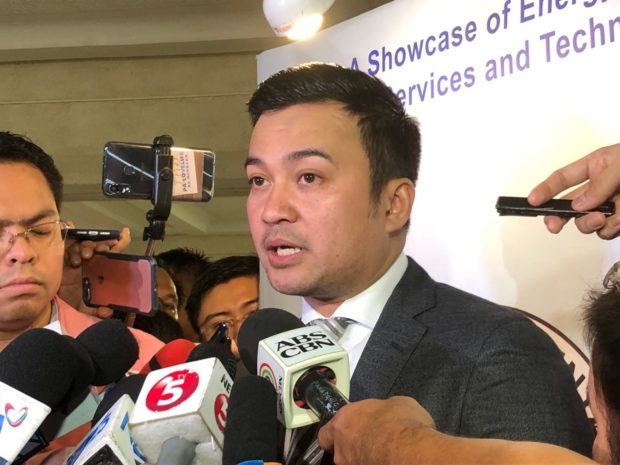 Marinduque Rep. Lord Allan Velasco speaks to the media at the House of Representatives on Monday, Nov. 11, 2019. Photo by Daphne Galvez / INQUIRER.net

MANILA, Philippines — Marinduque Rep. Lord Allan Velasco on Monday said the term-sharing deal on the House speakership stands and on track for his anticipated takeover next year.

Based on their pact, Taguig Rep. Alan Peter Cayetano – currently the Speaker – will yield his post as the leader of the House of Representatives to Velasco after 15 months.  Cayetano assumed the speakership in July.

“Sa akin, ang alam ko, tuloy pa rin (For me, as far as I know, [the term-sharing deal] will push through), an agreement is an agreement. Based on the gentleman’s agreement, I will see you next year as the next speaker of the House,” Velasco told reporters in an interview.

He, however, said that at present, he is not preoccupying himself with the speakership saying he is “focused on passing laws” that would help the public, especially in lowering the price of electricity.

Velasco is the current chairman of the House committee on energy.

(I’m focusing on passing laws that I believe would help lower the price of electricity and help the Filipino people.)

During the May 2019 campaigns, President Rodrigo Duterte and Davao City Mayor Sara Duterte introduced Velasco as the next Speaker of the House of Representatives.

Velasco is a party-mate of the President under the Partido Demokratiko Pilipino-Lakas ng Bayan (PDP-Laban). /kga