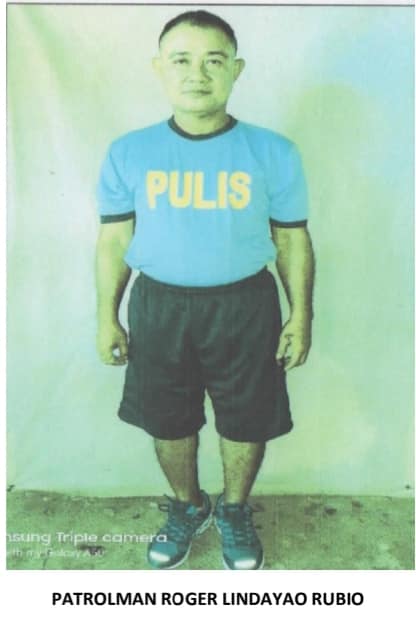 MANILA, Philippines – The Central Visayas police released Monday a photo of the policeman who allegedly shot to death a radio broadcaster in Dumaguete City, Negros Oriental.

Rubio is the alleged gunman and one of the two still-at-large suspects in the November 7 ambush of Dindo Generoso, who was known to be a hard-hitting journalist in his radio commentaries.

The other at-large suspect was identified as alleged gambling lord Tomacino Aledro. They are facing a murder case along with their alleged cohorts Teddy Reyes Salaw and Glenn Corsame – a retired policeman, who were earlier arrested by the police.

READ: Police nab 2 men, including a retired cop, linked to the killing of Negros radioman

According to police, Salaw is the brother-in-law of Aledro, who has reportedly fled to the United States.

Entoma said the local police is coordinating with the Bureau of Immigration on Aledro’s reported flight abroad.

Investigators also said Aledro owns the Mitsubishi Strada pick-up used by the other suspects in the murder. The pick-up has been recovered by a tracker team in Valencia City.

At least five tracker teams were deployed to hunt the other suspects.

A local politician could be behind the killing of Generoso, according to police, citing information from the Presidential Task Force on Media Security.

Police also said three angles are being eyed in the murder: the victim’s work in the media, politics, and land dispute. But De Leon earlier said it is possible that the ambush is highly related to the victim’s profession.