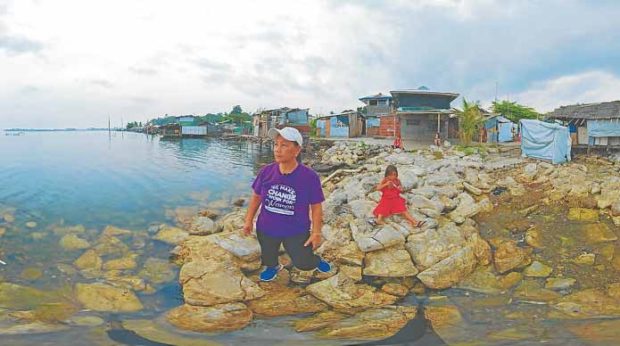 STORIESOF SURVIVORS “Yolanda’s Ground Zero 360°” exhibit, which is running in Glorietta 4 up to Thursday, features Anibong village in Tacloban six years after Supertyphoon “Yolanda” pummeled Leyte province. On the tour, viewers can see and hear for themselves the stories of the survivors as they try to move on from the rubble left behind six years ago. —KRIXIA SUBINGSUBING

MANILA, Philippines — Hardest to remove from the roads in the coastal village of Anibong in Tacloban City after Supertyphoon “Yolanda” (international name: Haiyan) struck six years ago, according to survivor Maria Rosario Bactol, were not storm debris or even the 3,000-ton commercial vessel that had been pushed ashore by cyclone surge.

“There were so many bodies,” the 61-year-old former village chair recalled. “[When] I opened my door [after the storm, I saw] corpses on my front lawn.”

For days, Bactol assisted grieving families identify the dead and bury them. But she and her family, too, had suffered: their house was suddenly full of people who had lost their homes in the storm.

She endured it all to help others survive.

Six years later, Bactol still remains a trusty guide to all who visit Anibong, thanks to a private organization’s efforts to memorialize the community’s healing in a virtual reality (VR) showcase.

The survivors’ stories of grief and healing anchor this simulated experience, produced by Postcards from Disaster in partnership with Microsoft Education’s Amicus Koi Solutions and VRTY of Australia.

“We thought of this as the perfect way to scale up the storytelling experience,” said Makoi Popioco, Postcards cofounder. “It’s a way of making you feel like you’re at the heart of it all. By seeing and hearing what they experience, you can have a better grasp of how they are living six years after Yolanda.”

For four years, Postcards has been doing post-Yolanda civic work in the villages, among the hardest hit by the typhoon in Eastern Visayas.

Initially, Popioco said, they taught some of the villagers to document their lives and the community—“postcards from disaster,” as he calls them—not only to memorialize the tragedy that struck them but also to depict how its consequences continue to affect their lives.

Among the villagers they had reached out to was John Rey dela Rosa, 19, who dropped out of school after Yolanda. He learned quickly how to use the camera and take compelling photographs of Anibong.

“In our sessions, they taught us not only how to handle a camera, but also about our rights [as displaced people],” Dela Rosa said. “They said that by documenting our lives—the hazards that surround us—we would be more aware of them.”

“Sometimes, they don’t believe the extent of their needs, and then you show them the photos—that’s when they’re compelled to act,” Popioco said.

Virtual reality therefore was a natural extension of their efforts to engage everyone concerned in rehabilitating Tacloban.

Through interactive 360-degree video, said VRTY CEO Kingston Lee-Young, they hope to “unlock the power of VR and 360-video” as not only belonging to games and entertainment, but also as a way “to educate … to change the way people experience information.”

It took them nearly 10 weeks, with team members working across five countries (Philippines, Australia, United States, Japan and China), to gather all the materials needed to put the showcase together, Lee-Young said.

“The biggest challenge in human rights stories is getting your viewer to care,” he said. “[So] we asked ourselves what stories are there that need to be told, and what the viewers want to see.”

There are two ways by which people can experience this storytelling innovation: through website (fully up on Monday) and through virtual reality gear.

Both contain the same interactive content, with Bactol’s narration leading the viewer to some of Anibong’s most notable post-Yolanda landmarks.

The showcase includes a 360-degree tour around the Yolanda Shipwreck Memorial Park that houses the bow of the M/V Eva Jocelyn, which was washed ashore by storm surge in Anibong at the height of Yolanda. If viewers go up the deck, they will get a panoramic view of Anibong—as well as the dangerous proximity of several houses to the sea that nearly lapped up the village six years ago.

While the villagers have long been advised to relocate to safer places, the lack of decent housing and economic opportunities keep them beached, Popioco said. At one point in the tour, viewers are taken into the home of Yolanda survivors of whom only one is qualified for relocation.

What’s clearest from the virtual reality tour, which also includes short documentaries and photographs taken by the villagers, is that there’s still a long way to go before Tacloban can fully move on from Yolanda’s devastation. At one point on the tour, Bactol reminds the viewers that Anibong is one of so many places most vulnerable to the effects of climate change.

Without concrete and urgent action from the government, she says, the village would continue to fall prey to the rising sea, and “the lands upon which our homes are built would be slowly erased.”

Popioco said Postcards and its partners hope to influence policy reforms through their project. Currently, he said, they were in constant touch with the government, advising it based on their documentation how best to handle relocation and youth education.

While they are planning to replicate the same project in other disaster-stricken areas, they wish to focus their attention first on Tacloban to make sure that they leave lasting changes in the community, he said.

“But it’s more important to educate the residents themselves,” he said. “They need to have a change in mindset, understand their rights … Once we raise awareness, they would be the ones to knock on [the government’s door].”