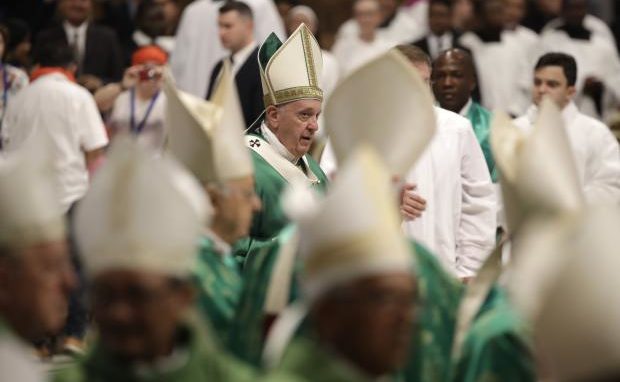 In this photo, taken on Oct. 27, 2019, Pope Francis leaves after a Mass for the closing of Amazon Synod in St. Peter’s Basilica at the Vatican. Germany’s Catholics reacted enthusiastically when bishops in the Amazon called for the ordination of married men as priests to address the clergy shortage in that region. But there is resistance elsewhere for the proposal that would overturn centuries of tradition, with the conservative Roman Catholic establishment making sure its voice is heard as Pope Francis prepares his own document on the issue. (Photo by Alessandra Tarantino / AP)

BERLIN — Germany’s Catholics reacted enthusiastically when bishops from across the Amazon called for the ordination of married men as priests to address the clergy shortage in that region. Such reforms have been pushed for decades by many German bishops and lay groups who hope it can lead to the liberalization of centuries of Roman Catholic tradition.

There is resistance elsewhere for the proposal, however, with the conservative Catholic establishment making sure its voice is heard as Pope Francis prepares his own document — expected by year’s end — that could determine whether married priests and female deacons eventually become a reality in the Amazon.

Bishop Franz-Josef Bode from Osnabrueck, Germany, welcomed the proposals and suggested that a European synod similar to last month’s assembly by the Amazon bishops could be a useful way to address pressing issues on the continent.

He told the Osnabrueck Diocese paper Kirchenbote that while the Amazon Synod’s recommendations would not be transferable one-to-one in Europe, they might show the way forward to a similar type of priesthood in Germany that allows for combining work and family.

“Regarding the role of women in our societal and ecclesiastical situation, the recommendations are a tail wind for our efforts so far,” Bode said.

A powerful lay organization, the Central Committee of German Catholics, or ZdK, stressed that its congregations also are concerned about such problems.

“The question of whether we still have enough priests who live in celibacy and can fulfill all the tasks needed in the community is one that needs to be asked in Germany as well,” ZdK Vice President Karin Kortmann told The Associated Press on Friday.

The ZdK will take part in the two-year “synodal path” meetings with the German Bishops Conference that holds its first plenary session in January in Frankfurt. It is widely expected to push for married priests and the ordination of women, among other reforms.

Vicar generals from 10 German archdioceses sent a letter Tuesday to the bishops conference and the ZdK, saying they also consider “fundamental reforms of the church in Germany to be urgently necessary, indeed essential.”

Cardinal Reinhard Marx, the archbishop of Munich and chairman of the bishops’ conference, expressed support for the Amazon Synod’s proposal, but he stopped short of calling for global recognition of married priests.

In a statement after it ended, Marx tried to dampen expectations among German Catholics by saying “the synod was not about the abolishment of celibacy, that’s not going to happen.”

The Catholic Church already allows for married priests in Eastern Rite churches and in cases where married Anglican, Lutheran or other Protestant priests have converted to Catholicism.

But if Francis accepts the synod’s proposal, it would mark a first for the Latin Rite church in a millennium and could help the church compete with evangelical and Protestant churches that are gaining converts, especially in South America.

The synod’s proposals have not been universally embraced outside the region.

Some key cardinals at the Vatican and elsewhere have voiced opposition, warning that married priests in the Amazon would create far-reaching, negative effects on the priesthood elsewhere for the 1.2 billion-member church, while also opening the door to an even greater problem: What to do about divorced priests.

Most of these critics are from the hierarchy’s conservative camp that has grown bolder in voicing skepticism or outright opposition to Francis. They form part of the high-level criticism that is buffeting the papacy over issues such as the clerical sexual abuse scandal, allegations of financial improprieties in the Holy See and doctrinal concerns.

Perhaps the most surprising critic was Cardinal Marc Ouellet, head of the Vatican’s powerful bishops office and a top adviser to Francis. Ouellet, considered a possible papal contender, published a book on the eve of the Amazon Synod affirming the value of the celibate priesthood and expressing skepticism that married priests would solve its clergy shortage.

A more predictable “no” came from Cardinal Robert Sarah, an arch-conservative from Guinea whom Francis has kept on at the Vatican’s liturgy office despite sharp ideological differences. He also published a book on the eve of the synod lamenting the “dark night” of crisis for the church, citing the sexual abuse scandal as well as overall doubt about Catholic doctrine and morals, and insisting on the value of priestly celibacy.

“I often hear people say that (celibacy) is only a question of historical discipline. I think that that is wrong. Celibacy reveals the very essence of the Christian priesthood. To speak about it as a secondary reality is hurtful to all the priests of the world,” he said.

Outside the Vatican, Cardinal Camillo Ruini — a conservative who was St. John Paul II’s vicar for Rome and head of the Italian bishops conference — also criticized the proposal and said he “hopes and prays that the pope … doesn’t confirm it.”

Ruini acknowledged the priest shortage in the Amazon and said the proposal was understandable, “but I think it’s the wrong choice,” he told Corriere della Sera. “The celibacy of priests is a great sign of total dedication to God in the service of your brothers, especially in an eroticized context like today’s.”

“Today marriage is profoundly in crisis: Married priests and their wives would be exposed to the effects of this crisis, and their human and spiritual condition wouldn’t be able to avoid it,” he said.

Most U.S. bishops have so far avoided emphatic pronouncements about the synod.

One of the more outspoken is Bishop Richard Stika of Knoxville, Tennessee, who says celibacy “is a living gift of a man to the church and should be the norm.”

In an interview with the AP, Stika said there are practical reasons for excluding married priests, at least in the U.S. Many dioceses are struggling financially and would be hard-pressed to support a household that included a priest’s wife and children, he said. It might also limit a bishop’s ability to transfer priests with a family.

“I know the pressures of being a celibate priest,” Stika said. “If you then have a family of six, your primary vocation should be to your family, not your parish.”
Brazilian Bishop Mário Antônio da Silva of the Amazonian diocese of Roraima, who attended the synod, said married priests and ordained women are needed in the Amazon.

“I defend celibacy for those who feel the priestly calling. But I also say: We need new collaborators in our communities,” Da Silva told the AP. “The ordination of married men meets this need, so I’m in favor.”

He suggested the concept might eventually spread beyond the Amazon.

“It’s a process that must advance for the maturity of our church,” Da Silva said, “not just in the Amazon, but who knows, maybe in other parts of the church, in our continent, and the whole world.”

“We want Pope Francis to help us move forward with this,” he said.