Maguindanao massacre verdict out in 30 days 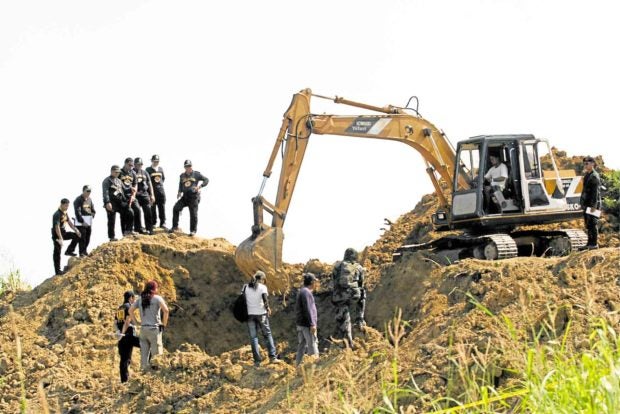 GRUESOME Forensic experts dig for bodies and evidence at the site where 58 people, mostly journalists, were ambushed and killed in Ampatuan, Maguindanao province, in this 2009 photo. —JEOFFREY MAITEM

Chief Justice Diosdado Peralta on Friday said the Supreme Court has given Quezon City Regional Trial Court Judge Jocelyn Solis-Reyes 30 more days, or until Dec. 20, to come out with her decision on the Maguindanao massacre case.

“We understand her predicament and we allowed her to have an extension of one month but as I said, motions for extension are the exception rather than the rule and we understand her plight and I hope that she will no longer ask for another extension so that before the end of the year, those cases will finally be decided,” Peralta said in a breakfast conference with reporters covering the high court.

He noted the case pending before Reyes has “so many accused” and “so many victims,” and as a former judge and public prosecutor, he both understood Reyes’ plight and the concerns of the complainants.

“I am frustrated of what happened to the victims but I think Judge Reyes did her best in order to give justice to the victims and also in order to afford the accused the required due process of law under the Constitution,” Peralta said.

In a letter dated Oct. 28 to Court Administrator Jose Midas Marquez, Reyes asked for an extension citing the “voluminous records” of the case which, according to her, have now reached a total of 238 volumes, of which 165 are records of proceedings, 65 are transcripts of stenographic notes and eight are prosecution’s documentary evidence.

Marquez, in a reply dated Nov. 7, said the judge’s request was granted because it was “reasonable.” Reyes, however, was reminded that her new deadline is nonextendible.

The judge was also told to provide Marquez’s office a copy of her decision within 10 days after promulgation as proof that she had complied with the new deadline.

He noted that while the Constitution provides that all trial courts promulgate their decisions within a 90-day period, there are also some rules that require a shorter period to promulgate.

‘A short time to wait’

“We have waited for 10 years, the 30 days is a short time to wait,” said lawyer Nena Santos, who represents families of 38 massacre victims.

Lawyer Harry Roque, who represents families of slain mediamen, also said he respected the extension but renewed his calls for “systemic changes” in the country’s trial system.

Justice Secretary Menardo Guevarra and private lawyers earlier said the trial concluded last July 17 while the parties were given until Aug. 15 to submit their memoranda, after which the decision was deemed submitted for resolution.

They said they were expecting a decision to come out by Nov. 23, the massacre’s 10th anniversary.

“It is worth the wait. What is one month compared to 10 years? Lower courts usually go on Christmas break in mid-December. So the decision may be out by Dec. 14,” said Presidential Task Force on Media Security executive director Jose Joel Sy Egco.

The massacre took place in the town of Ampatuan, when armed men blocked a convoy carrying relatives of then Buluan Vice Mayor Esmael Mangudadatu on their way to file his certificate of candidacy for governor, as well as a group of mediamen.

A total of 58 people shot dead, 32 of them mediamen and the rest Mangudadatu’s relatives and associates, as well as several innocent motorists who happened to be in the area.

Members of the Ampatuan clan led by Andal Ampatuan Jr. are being tried for the case.

The Ampatuan patriarch and alleged mastermind in the killings, Andal Sr., died in July 2015.

Ninety out of the 117 arrested were still in jail, including primary suspects Andal Jr. and Zaldy “Puti” Ampatuan.

Their brother, former Maguindanao Gov. Sajid Islam Ampatuan, is currently out on bail.