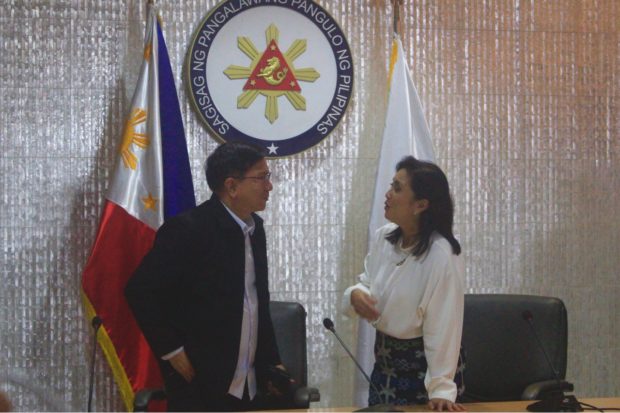 Vice President Leni Robredo (right) talks to PDEA Director General Aaron Aquino after the first meeting of the Inter-Agency Committee on Anti-Illegal Drugs (ICAD) since Robredo was appointed by President Rodrigo Duterte as co-chairperson — a post that she will share with Aquino. (Photo by Gabriel Pabico Lalu/ INQUIRER.net)

Aquino said this Friday, after the first meeting of the Inter-Agency Committee on Anti-Illegal Drugs (ICAD) with their newly-appointed co-chair. Robredo was designated by President Rodrigo Duterte as his drug czar after the Vice President criticized anew his bloody drug war.

Prior to her appointment, Aquino was the sole head of ICAD. Also prior to Robredo’ss acceptance of the additional task from the Chief Executive, Aquino had expressed doubts about Robredo’s capability to lead the administration’s anti-drug campaign saying she “will fail” as drug czar.

“Kasi sabi ko nga, it would be bound to failure kasi nga in terms of experience, in terms of working with law enforcers, walang gano’n [experience] ang ating Vice President,” said Aquino, who was sitting beside Robredo during the meeting.

(Like I said, it would be bound to failure because in terms of experience, in terms of working with law enforcers the Vice President has not much [experience].)

“Maybe, Ma’am, I could ask you to join us in one of the operations, I would also be there with you.”

(So from the planning stage, during the conduct of operations and after the operations, at least, you would feel, Ma’am, what our law enforcers are rreally doing… This could be my challenge to you now, Ma’am, so you would see how our enforcers on the ground work, and if there are lapses or defects that you would see, because you would see it clearly during actual [operations].)

(Thank you so much, General. I would love that.)

Aquino has likewise previously expressed that it would feel awkward working with the country’s second-highest official. During Friday’s briefing, Aquino appeared shy when Robredo offered her microphone to him at one point when his microphone was not working.

“Before the meeting, I had the chance to meet the Vice President […] I never had the chance to talk to her so definitely I will feel awkward, and truly enough kanina (a while ago) I felt awkward,” Aquino . said.

Robredo assured that Aquino should not worry about his past statements, as their mandate in co-leading ICAD should focus on solving problems hounding the drug war.

“Before we started the briefing, I assured the Director-General not to worry about me, sabi ko ‘wag nang pag-usapan ‘yong mga nasabi (I told him not talk about what was said) before, kasi ang sadya naman namin para sa meeting na ‘to (because the purpose of this meeting) is moving forward, what to improve on what we already have,” she noted. /kga