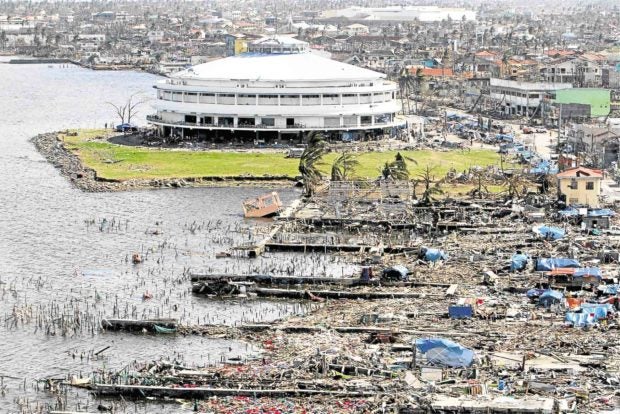 This file photo shows the destruction wrought by Supertyphoon “Yolanda” in 2013. On Friday, November 08, 2019, the government vows to resilient communities in the Philippines as the country commemorates the sixth anniversary of Yolanda’s onslaught. INQUIRER FILE PHOTO

MANILA, Philippines — The government has vowed to create resilient communities in the Philippines as the country commemorates the sixth anniversary of the onslaught of supertyphoon “Yolanda.”

“Once again, we honor the sacrifices of those in the frontline agencies of the government, the different organizations, the many volunteers, and the unnamed and anonymous Juan de la Cruz, who responded during one of the most difficult times our country faced. We laud the exemplary resilience of our own people, which in the face of great adversity, have remained steadfast and have moved forward,” presidential spokesperson Salvador Panelo said in a statement on Friday.

Yolanda pummeled the Visayas on November 8, 2013, and killed at least 6,000 people in the region. It was called the strongest typhoon that ever hit land.

Panelo said Yolanda has “taught us, especially those in the bureaucracy, a hard lesson in public service.”

“The Office of the President recognizes that natural hazards have become the new normal in the 21st century, and therefore, we must continue to be relentless in creating safe, adaptive and resilient communities. It is our collective responsibility,” he said. /kga