Mothers-to-be fear for their unborn in smog-choked Delhi 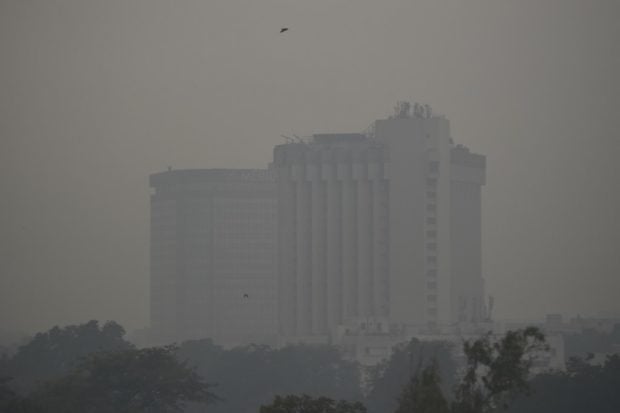 Buildings are seen covered in thick smog in New Delhi on November 7, 2019. – Police have arrested more than 80 farmers in a northern Indian state for starting some of the fires blamed for the new pollution crisis in New Delhi and other cities, officials said November 7. (Photo by Money SHARMA / AFP)

At a recent prenatal class in the Indian capital, Gokavi and other expectant mothers shared their feelings of helplessness and anger at having to breathe poisonous air day in and out.

“I always keep the balcony door closed and don’t go out as much. I fear there could be breathing issues when the baby is born,” Gokavi, 26, told AFP.

Like Gokavi, other anxious mothers-to-be listened to tips and tricks on coping with the smog that is so bad that Delhi’s chief minister recently likened the city to a “gas chamber”.

“Don’t go out for morning walks. Try and go in the afternoon when the sun is out,” was all the instructor could advise the women, who listened intently with furrowed brows.

With no respite from the pollution in sight, doctors too have little choice but just to recommend face masks and expensive air purifiers at home – if they can afford them, which many cannot.

India is home to 14 of the world’s 15 most polluted cities, according to the World Health Organization.

Every winter, smoke from farmers’ fires combine with industrial and vehicle emissions to turn towns and cities across northern India into smog-blanketed hellholes.

This toxic cocktail cuts short the lives of one million people in India every year, according to government research published in June.

The same report blamed air pollution for killing more than 100,000 under-fives every year.

Doctors said kids breathe the noxious air twice as fast as adults because of their smaller lungs, causing respiratory problems and even impairing brain development.

There is evidence to suggest that adolescents exposed to higher levels of air pollution are more likely to experience mental health problems, UNICEF said this week.

As bad as smoking

But even before they are born, smog is as bad as smoking when it comes to miscarriages, another study released in the journal Nature Sustainability last month indicated.

The research done in Beijing – another capital that has for years battled filthy air – linked high levels of pollution and an increased risk of “silent miscarriage” in the first trimester.

This happens when a fetus hasn’t formed or has died but the placenta and embryonic tissue remain.

Another study, in 2017, suggested that tiny particles can enter the fetal side of the placenta and disrupt the development of the unborn baby. 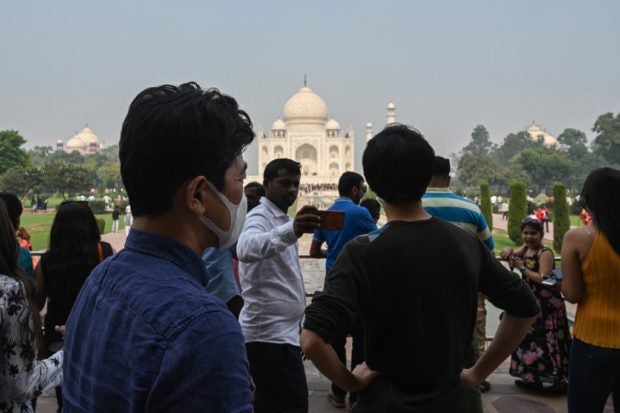 In this photo taken on November 5, 2019, tourists wear face masks to protect against air pollution as they visit the Taj Mahal in Agra. – India’s top court has ordered a complete halt to stubble burning around Delhi, a major contributor to lethal smog that on November 5 kept the metropolis of 20 million people choking in air rated “very poor”. (Photo by Money SHARMA / AFP)

Rinku Sengupta, an obstetrician at the busy neonatal unit, says that rates of such underweight babies as well as premature births are rising in cities with high levels of pollution.

“We are very worried because we know that the pollutants cannot only affect the lungs of mothers but these can even reach the placenta and affect the placental function,” she told AFP.

“It is difficult to prove a direct cause-effect relationship. But there is enough evidence now to say that there is a direct link and we need to sit up and think what we can do about it,” she said.

“It is an emergency situation,” she added.

Arti Bhatia, 35, is now the proud mother of a lively six-month-old daughter, Ayesha.

But her journey to motherhood was filled with the pain of miscarriages, and she wonders whether pollution was to blame.

“I had my baby after three years of trying and in those three years I lost a few pregnancies,” Bhatia told AFP.

“The first time I lost (a pregnancy) I thought maybe it was bad luck, maybe it was not meant to be or something. But subsequently, it was like ‘is it because of the air we breathe’?” /kga