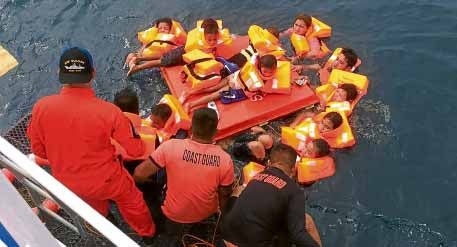 ALL SAVED Coast Guard rescuers pick up from the water passengers of the MV Siargao Princess, which capsized and sank off Sibonga, Cebu, on Thursday. All 62 passengers and crew of the vessel were rescued. —PHOTO FROM PCG/AFP

CEBU CITY—Authorities rescued dozens of people after a ferry sank in rough seas off Sibonga, Cebu province, on Thursday.

Lt. (j.g.) Michael John Encina, spokesperson for the Philippine Coast Guard in Central Visayas, said all 62 passengers and crew of the MV Siargao Princess had been rescued.

Agence France-Presse (AFP) earlier reported that rescuers plucked 59 people from the waters off the island, while another three swam to shore after the vessel took in water and capsized.

“There are no reported missing persons,” Encina said.

The Siargao Princess, a fast vessel, left Loon town in Bohol province for Sibonga at about 9 a.m. and was approaching Cebu when it was buffeted by big waves and it took in water, Encina said.

“The boat has sunk. We haven’t been able to find it,” AFP quoted him as saying.

Encina said the vessel had radioed that it was in trouble.

He said the Coast Guard received the distress call at 11:15 a.m., with the vessel reporting it was  taking in water.

The passengers and crew abandoned the vessel, which  capsized and sank about 5.6 to 9 kilometers off Sibonga.

For at least two hours, the passengers, including children, all wearing life vests, drifted at sea on a raft. They were picked up by Coast Guard rescuers and taken to the Port of Cebu.

Encina said an investigation had started to determine why the vessel sank.

He said early findings showed that the front hatch cover of the vessel was detached in the battering by big waves, allowing water to flood in.

Maria Teresa Sanchez, a police officer and one of the passengers, said she was grateful that everybody on the vessel survived.

“We are very thankful. This is a great miracle,” she said in a radio interview. —WITH A REPORT FROM AFP