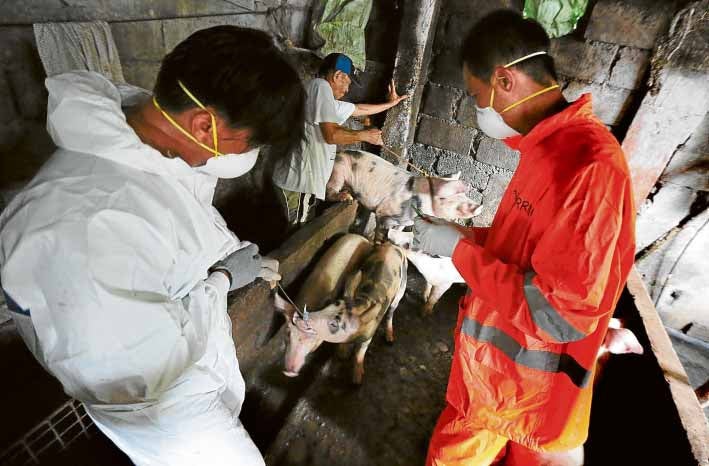 President  Duterte has instructed the release of P1 billion in contingency funds from his office to the Department of Agriculture (DA) to control and contain the spread of African swine fever (ASF) in the country.

Presidential spokesperson Salvador Panelo on Thursday said the President approved Agriculture Secretary William Dar’s request to use the funds from the Office of the President to indemnify hog raisers and to set up cold storage areas in the ports of Manila, Subic, Batangas and Davao for the “100-percent monitoring” of imported meat products.

On Wednesday, the Philippines notified the World Organisation for Animal Health of 24 new ASF outbreaks in Luzon.

The President last month ordered all government agencies to coordinate in adopting policies and measures to control and manage the spread of ASF.

In a press conference earlier this week, Dar said they were now considering the implementation of a “first border inspection” wherein imported meat would be examined right at the port of entry.

Customs Assistant Commissioner Vincent Maronilla told the Inquirer that only a “close-open” examination was being done at the country’s entry points where officials literally opened shipping containers loaded with agricultural products for a quick look and immediately closed them to avoid spoilage or contamination.

Because there were no available cold storage facilities at these ports, the shipments were delivered to the National Meat Inspection Services and only there were the imported commodities unloaded and examined more thoroughly, he said.

The first border inspection has been suggested by advocacy group Samahang Industriya ng Agrikultura (Sinag) after it noted that the first ASF outbreak in the country, recorded in Rizal province, was from imported pork.

“The only way to stop ASF is to stop all pork importations until such time that we can fully implement the first port of entry quarantine control as provided by the food safety law (Republic Act No.  10611),” said Sinag chair Rosendo So. “No strip inspection at the port of first entry, no pork importation.”

Sen. Francis Pangilinan, a former food security chief, also recommended the ban on imported pork, but for the purpose of helping local producers.

“This would be a big boost to local hog raisers, many of whom are also farmers who are seeking to increase their income through hog raising,” he said.

The ASF scare had dampened pork consumption despite statements from the health department that the disease did not affect humans. This had depressed pork prices to as low as P70 per kilogram from P110.

More than 70,000 pigs have been culled so far in the effort to stop the spread of the disease.

ASF cases have been reported in Rizal, Bulacan, Pampanga, Nueva Ecija, Pangasinan and some parts of Metro Manila.