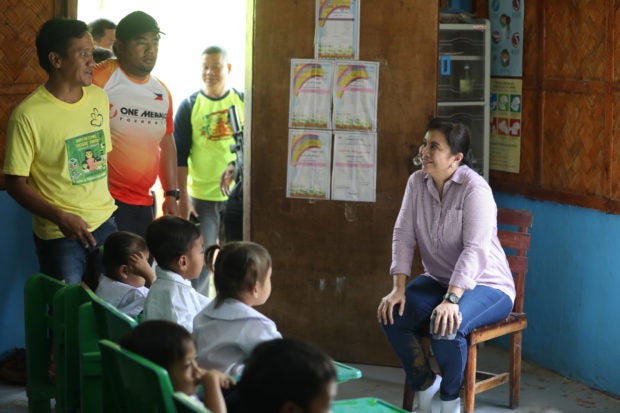 Vice President Leni Robredo visits a school in the remote Sitio Macantog, Barangay Tandang Kutyo in Tanay, Rizal, on Thursday, November 07, 2019, to lead the ceremonial turnover of solar kits from One Meralco Foundation Inc. The Office of the Vice President, in partnership with Meralco, has installed 29 units of solar kits in each household at Sitio Macantog, in which 60 families have no access to potable water and electricity. (Photo by OVP)

TANAY, Rizal – After resigning from her first Cabinet post as the Duterte administration’s housing czar years ago, Vice President Leni Robredo devoted her attention to carrying out programs that will help alleviate poverty incidence in the country.

Now that she has accepted the offer to return to the Cabinet as co-chairperson of the Inter-Agency Committee on Anti-Illegal Drugs (ICAD), Robredo has admitted she may be forced to skip some activities to implement the anti-poverty programs of the Office of the Vice President (OVP).

She, however, also assured that with or without her presence in events, her Angat Buhay program and OVP’s community visits would continue.

“Pero iyong sinabi ko, minimum disruption to what we’re doing already. Dadagdagan ko na lang iyong oras ko sa isang araw,” said Robredo, who took on an hour-long climb to Sitio Macantog in Tanay, Rizal, on Thursday to turn over nearly 30 units of solar panel kits to residents of the upland remote community that has no access to potable water and electricity.

(But like what I said, [it’s going to be] minimum disruption to what we’re doing already. I’ll just put in additional hours to my day.)

(If at all, maybe we’ll just adjust the ceremonial functions, those meetings not connected to Angat Buhay, social functions connected with the office, perhaps those will be reduced. But the provincial visits like this, I won’t lessen it because it’s been my commitment since 2016.)

Robredo’s visit to Tanay is one of Angat Buhay’s programs, aside from building schools and shelters and providing livelihood programs to impoverished and far-flung communities nationwide.

And since OVP is operating on a small budget, its strategy was establishing partnerships with private organizations in order to implement its anti-poverty programs. For her visit here, OVP partnered with a major power company to provide solar panel kits to residents of Sitio Macantog.

Sitio Macantog is not accessible by vehicles. Going here requires an uphill trek on slippery, stony, and muddy terrain for at least an hour.

(Many communities depend on us. Many partners also depend on us. So if there’s a need to work eight days a week, we’ll do it. But what we’ve been doing should not be disrupted.)

On Wednesday, Robredo accepted President Rodrigo Duterte’s offer for her to co-chair ICAD, which, prior to her appointment, was solely being led by Philippine Drug Enforcement Agency (PDEA) chief Director General Aaron Aquino.

Robredo said she will hold a meeting with ICAD members on Friday afternoon at the Quezon City Reception House.