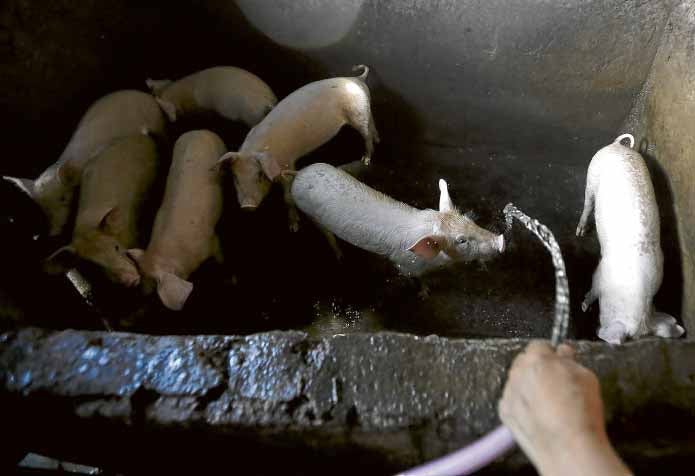 NEW INFECTIONS Swine fever has spread to Barangay Deparo in Caloocan and Barangay Baritan in Malabon, raising to three the number of cities in Metro Manila affected by the hog disease. —RICHARD A. REYES

MANILA, Philippines — African swine fever (ASF) has spread to the cities of Caloocan and Malabon in Metro Manila even as the virus continues to infect more areas in locations earlier detected with the highly contagious hog disease, according to the Department of Agriculture.

In a second report it submitted on Monday to the Organization of Animal Health (OIE), the Bureau of Animal Industry (BAI) confirmed African swine fever outbreaks in two barangays in Caloocan and Malabon, as well as in 22 cities and municipalities in Pampanga and Bulacan provinces.

At a press briefing in Malacañang on Wednesday, Reildrin Morales, head of the secretariat of the agriculture department’s Crisis Management Team on ASF, said that so far more than 70,000 hogs, or 0.55 percent of the country’s 12.7 million hog population, had been culled.

He said only about a third of the culled pigs had been infected with the African swine fever virus, since the policy of the government was to depopulate all farms with a confirmed case within a kilometer radius.

Morales said the rate of culling in the Philippines was still much lower than in countries like Vietnam with 600,000 pigs culled every month, and South Korea with about 140,000 every month.

Earlier cases were reported in the municipalities of Mapandan and Bayambang in Pangasinan, Rodriguez and Antipolo City in Rizal, and in seven barangays in Quezon City. The disease has also been reported in the provinces of Nueva Ecija and Cavite.

The outbreaks have prompted the Philippine Association of Meat Processors to stop buying local pork and instead import all its requirements.

Most of the fresh outbreaks were in 112 barangays of 13 towns and cities in Bulacan, according to the latest BAI report.

Bulacan supplies 60 percent of Metro Manila’s pork requirements, according to the website of the province.

In Pampanga, the towns of Apalit, Bacolor, Candaba, Minalin, San Luis, and the cities of Angeles and San Fernando were found with hogs positive for the virus.

There were also recorded cases of African swine fever in Barangay Deparo in Caloocan and Barangay Baritan in Malabon, according to the BAI.

Overall, a total of 166 barangays in four provinces and four cities in Luzon have confirmed cases of the hog disease, a majority of which are in Bulacan and Pampanga.

Samahang Industriya ng Agrikultura chair Rosendo So said barangay officials’ lack of orientation on African swine fever had made it difficult for the industry to control and contain the spread of the disease.

The Department of Agriculture could not yet point to China as the source of African swine fever in the Philippines despite last month’s attempted smuggling of tainted pork products from that country, according to Morales.

Morales clarified reports quoting Agriculture Secretary William Dar as saying the cases in the Philippines might have originated from China.

Morales said the agriculture department had determined that the disease originated from the Rodriguez landfill in Rizal province sometime in late August, after hog raisers fed their pigs tainted swill believed to have come from hotels and restaurants.

On Oct. 28, customs authorities seized at least P3.5 million worth of pork and other meat products misdeclared as tomato paste and vermicelli. The shipment arrived on Oct. 12.

“What Secretary Dar was saying was that the shipment from China tested positive [for the virus],” Morales said.

But since the disease was discovered earlier in August, “it’s possible there were smuggled goods prior to the discovery of ASF in the country with similar shipments of tainted goods,” he added.

Morales said the Philippine hog raising industry had incurred about P3 billion in losses due to the spread of the virus since August, based on a “straightforward computation” of projected losses.

“For example, there are about 3,000 pigs that are left unsold every day in the National Capital Region and adjacent areas like Bulacan and Pampanga … and the value of each pig is P10,000,” he said. “That’s P30 million in losses per day. So in a month, hog raisers are losing P900 million, or almost a billion pesos.” —With reports from Carmela Reyes-Estrope and Tonette Orejas