Bayan demands state forces to stay away from QC office 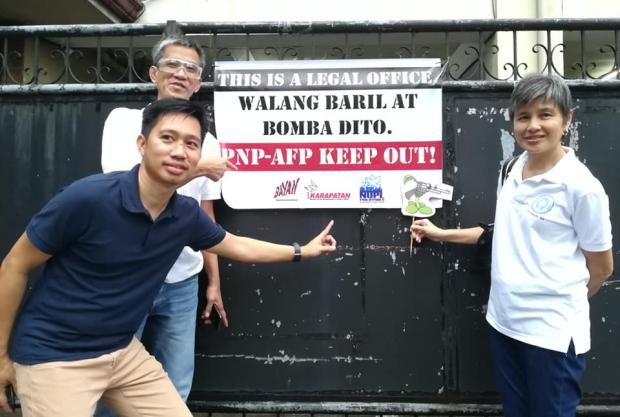 MANILA, Philippines – “This is a legal office. Walang baril at bomba dito. PNP-AFP keep out!”

[This is a legal office. There are no guns or bombs here. Philippine National Police-Armed Forces of the Philippines keep out!]

Militant group Bagong Alyansang Makabayan (Bayan) posted that sign on Wednesday outside its Quezon City office after officials from the local barangay and the Commission on Human Rights (CHR) inspected the premises and found no firearms or bombs.

Several members of the media covered the inspection at the Bayan compound, which also houses offices of Karapatan and the National Union of People’s Lawyers (NUPL).

Bayan opened its office for inspection a day after they insisted that they were not coddling rebels nor were they engaged in making firearms and explosives.

The group made the move after a series of joint military and police teams’ raids on offices of Bayan Muna, Gabriela, and the National Federation of Sugarcane Workers (NFSW) in Negros Occidental and the office of Bayan in Tondo, Manila.

The raids resulted in the arrest of 57 individuals in Negros Occidental and three others in Manila.

The groups have been tagged as legal fronts of the communist force New People’s Army (NPA).

The groups, however, denied any involvement with the NPA.

Bayan insists: Our QC office not a rebel safehouse, not a firearms storage facility