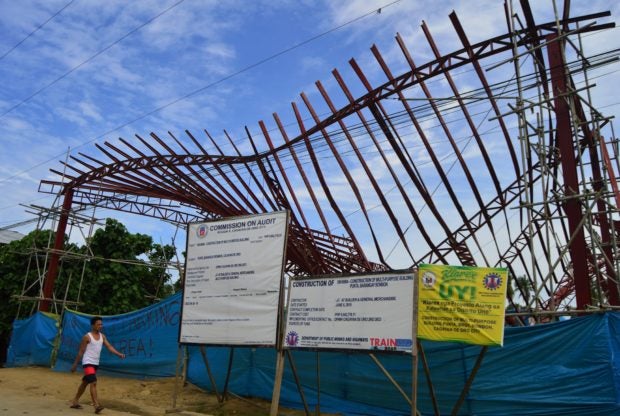 CAGAYAN DE ORO CITY – Weak steel bars were believed to have been the cause of the collapse of a covered court at the village of Bonbon here on Tuesday, Nov. 5., that was still under construction but where at least three workers were injured.

Lope Matildo, councilor of Bonbon and acting village chair, said on Wednesday, Nov. 6, that the structure gave way around 5 p.m.

Matildo said it appeared that the steel bars used in the construction were substandard because it could not hold the weight of at least 105 galvanized iron sheets that workers were installing as the structure’s roof.

The covered court, supposed to be multipurpose, was being built through funding from allocations given to Rep. Rolando Uy. The construction started on June 6, 2019 and was 80 percent finished by the time of the collapse.

The contractor of the project was AT Builder and General Merchandise, according to the Department of Public Works and Highways (DPWH).

Rovidico Manueza, one of the workers, said at least 10 of his co-workers were bringing the GI sheets to be installed as roofing when metal trusses installed earlier gave way. The structure’s steel posts were bent when the trusses fell down. 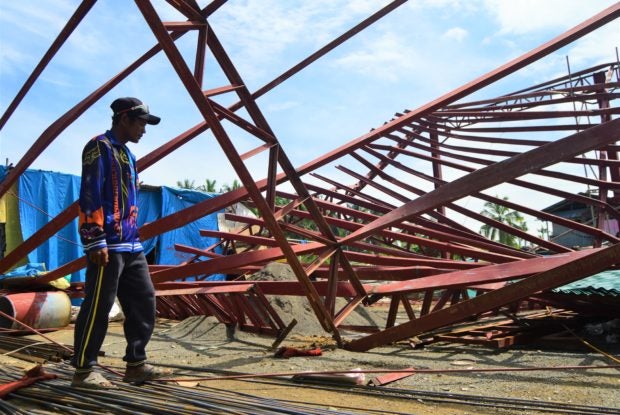 Those injured were identified Arjel Gallan, 22, Ronnie Miñoza, 26, and Wilson Berja, 27, all from Salay, Misamis Oriental and construction workers.

Vinnah Jeanne Maghinay, DPWH regional information officer, said a team of engineers from the department and contractor had inspected the structure and were investigating.

Maghinay said the series of earthquakes that struck Mindanao last week could have been a factor in the collapse of the unfinished structure.

She said the contractor was liable for the damage and will shoulder additional costs to rebuild the structure, which costs at least P5.6 million.

Remy Labiano, Uy’s spokesperson, said the collapse of the covered court was the first case of a project of the congressman being damaged in an accident./TSB