MANILA, Philippines – The Association of General and Flag Officers (AGFO) of the Armed Forces of the Philippines (AFP) is seeking a stop to the “undue trial by publicity, spawned by some media entities” against retired Major General Jovito Palparan in a statement released Wednesday. 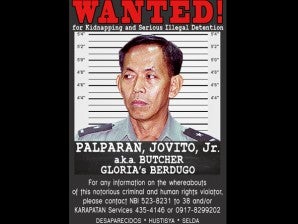 Retired Major General Jovito Palparan now finds himself on the other side of the fence as the once hunter is now the hunted after a warrant for his arrest was issued by a local court for his supposed role in the alleged abduction of two student activists in 2006. CONTRIBUTED PHOTO

“Let the courts determine his innocence or guilt, in fair due process. The rule of law should prevail over the demands of interest groups in the courts of public opinion,” retired lieutenant general Raul Urgello, Chairman/president of AGFO, said in the statement.

The AGFO also protested the labeling of Palparan as a “berdugo” (butcher).

“We are disturbed by the exploitation of the case of general Palparan, who has not yet been convicted by any court of law, and his projection as a serial murderer, a ‘berdugo’, based on evidences that are yet to be scrutinized in due process by the court,” Urgello said in their statement.

“We believe that he must face the charges against him and equally in his right to be tried fairly based on facts and circumstances devoid of any political or ideological insinuations,” Urgello said.

He said that there would be “demoralization in the soldiers’ ranks” if “ideological enemies of the state will capitalize on this issue to support their deadly political-military struggle.”

Palparan has recently been issued a warrant of arrest by the regional trial court of Bulacan. He and three other Army personnel were allegedly involved in the crimes of kidnapping and serious illegal detention of two student activists from the University of the Philippines (UP) back in 2006.

Manhunt operations are underway and a P500,000 reward has been put up by the government for information that would lead to his capture.

“We hope that Major General Palparan will be enlightened and begin to trust our system of justice and the people appointed to implement it. We join with our people in the quest for truth and justice; in the pursuit of a strong government and a credible armed forces,” Urgello said in their statement.