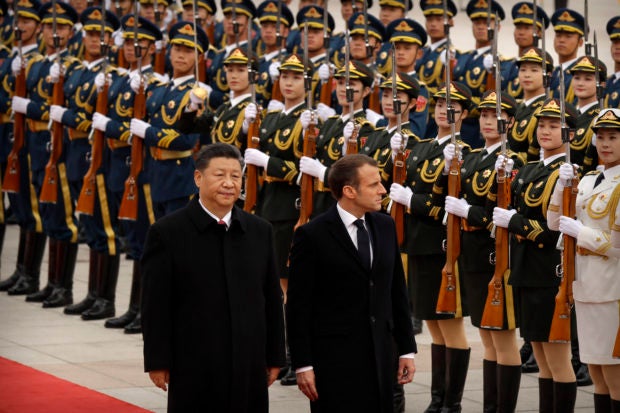 BEIJING — Chinese leader Xi Jinping on Wednesday hailed a visit by French President Emmanuel Macron as giving a boost to multilateralism and free trade, amid ongoing economic tensions with Washington.

The two countries also pledged continued support for the Paris Agreement as the U.S. begins its withdrawal from the landmark climate deal.

Following a welcome ceremony at the Great Hall of the People in central Beijing, Xi said the two leaders had sent “a strong signal to the world about steadfastly upholding multilateralism and free trade, as well as working together to build open economies.”

In his remarks, Macron said China and Europe “share the same feeling that trade war only results in losers.”

“Developing market access and partnerships between our companies is a priority,” Macron said.

The French leader’s visit is timed to ease some of the tensions that are stifling global commerce, with the U.S. and China in a bitter fight over tariffs and the EU pressing China to make good on commitments to boost imports of agricultural products and manufactured goods while opening its market for financial products and other services.

During a joint briefing with Xi, Macron appeared to take a jab at the U.S., which began this week the process of withdrawing from the Paris climate agreement.

Macron expressed “regret” over “some countries’ negative attitude” toward environmental protection and the fight against climate change, pledging to work with China on halting the loss of biodiversity. The French president’s office also released a statement Wednesday that reaffirmed France and China’s joint support for the “irreversible” Paris Agreement.

On the issue of fundamental freedoms and human rights, Macron said that he and Xi discussed their respective positions. Western leaders have been under pressure to address the five months of anti-government protests in Hong Kong, a semi-autonomous Chinese territory.

Earlier this week, Macron visited the commercial hub of Shanghai, where he visited a sprawling import fair and presided at the ribbon-cutting for a branch of Paris’ famed Center Pompidou modern art museum along the Chinese city’s riverfront.

Designed by British architect David Chipperfield, the Pompidou Shanghai embodies China’s aspirations to become a center of culture as well as business, although the ruling Communist Party strict demands for ideological purity have caused some to question whether it can succeed at such a quest.

The Pompidou will assemble items for an exhibit at the Shanghai outpost from among its huge collections under a five-year contract. /kga