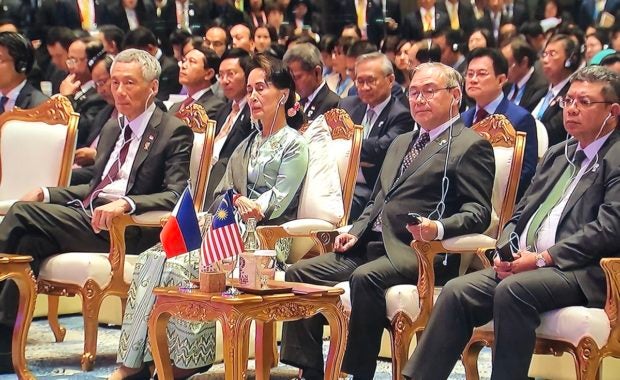 MANILA, Philippines — An Inquirer reporter who tweeted on Monday that President Duterte had skipped the last event of the 35th Association of Southeast Asian Nations (Asean) Summit in Thailand drew the ire of Foreign Secretary Teodoro Locsin Jr., who tweeted back a harsh expletive.

“Uh, did you get the putangina I sent you? That’s the last event, purely ceremonial and short. Jokowi had left, Mahathir too,” Locsin tweeted Jhesset Enano on Tuesday.

Uh, did you get the putangina I sent you? That's the last event, purely ceremonial and short. Jokowi had left, Mahathir too. https://t.co/sE6aoB0F6J

Enano was assigned to cover the President’s attendance at the summit and had tweeted a photograph of its last event with the following cutline: “LOOK: Foreign affairs Teodoro Locsin Jr. @teddyboylocsin sits with other world leaders at the closing ceremony of the 35th Asean Summit in Thailand. President Duterte appears to have skipped this event too.”

LOOK: Foreign Secretary Teodoro Locsin Jr. @teddyboylocsin sits with other world leaders at the closing ceremony of the 35th Asean Summit in Thailand. President Duterte appears to have skipped this event, too. #Asean2019 @inquirerdotnet pic.twitter.com/nqRp5Fy3ds

Locsin had previously retweeted Enano’s post, while explaining the President’s absence at the closing ceremony in Nonthaburi, Thailand.

“One event you shet & just ceremony. If he didn’t catch the plane’s takeoff at 7 p.m. he’d be stuck. He left at 6 p.m. after Asean-Japan Summit, bilats with Japan, 3 hours of East Asia Summit – since he spoke first, he stayed til last spoke as a courtesy. Others stepped out,” Locsin said earlier.

The National Union of Journalists of the Philippines (NUJP) said that Locsin’s tweet was “uncalled for.”

“The tweet simply stated a fact and insinuated nothing. It is a shame since [Locsin] is fond of boasting about his journalistic past,” said NUJP chair Nonoy Espina.

“LOOK: Trade Secretary Ramon Lopez sits at the RCEP summit here at #Asean2019, in lieu of President Duterte. The President also skipped this summit last year, when he reportedly took power naps. No reason yet for his absence this time,” Enano said on her Twitter account.

During the Asean summit in Singapore in November 2018, the President also skipped the RCEP Summit and five other related events to take “power naps to catch [up] on sleep,” presidential spokesperson Salvador Panelo had said.

Panelo had yet to explain why the President skipped both the RCEP summit and the closing ceremony, which he was originally scheduled to attend. —With a report from Melvin Gascon