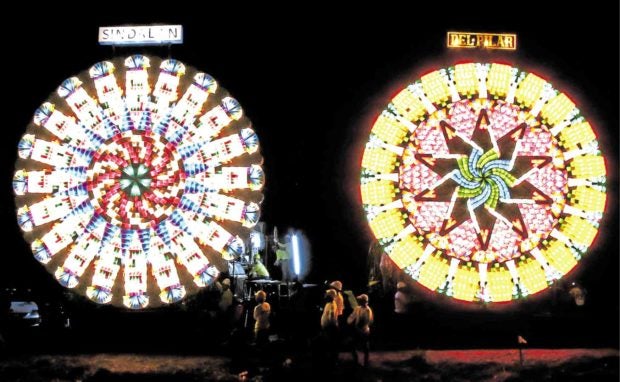 STAR OF BETHLEHEM Pampanga’s giant “parul” (Christmas lanterns) are crafted by artisans in the villages of the capital city of San Fernando to symbolize the biblical Star of Bethlehem, also known as the Christmas star, which guided the three wise men to the birthplace of Jesus Christ. —RICHARD A. REYES

CITY OF SAN FERNANDO, Pampanga, — Twelve villages in this Pampanga capital are vying this year to be the maker of the brightest and most beautiful giant lantern in the world’s one-of-a-kind tradition in the last 111 years.

The number of competitors for the Giant Lantern Festival on Dec. 14 has increased from 10 as Barangay San Agustin decided to join again after 62 years, according to city tourism officer Ching Pangilinan.

Another new entrant is Barangay Bulaon.

The regular 10 contenders are mostly from the city’s southern section, which is bordered only by a river from Bacolor town where residents use lanterns to light the procession of the images of their patron saints during the novena Masses in the run-up to Christmas.

The availability of car batteries and electricity here in 1937 transformed the tradition into a “ligligan parul” (lantern showdown) where the big creations played to the live music of bands until the bulbs busted into the morning.

World War II, martial law and even the Mt. Pinatubo eruption and succeeding lahar flows failed to stop the tradition, according to Ernesto Quiwa, the oldest lantern maker here.

“The giant lanterns are our version of the Star of Bethlehem,” Quiwa said of the festival’s religious undertone that craftsmen always try to approximate.

Pangilinan said the city government and the Giant Lantern Festival Foundation had raised funds from private companies, enabling them to give a P300,000-subsidy to each participating village.

As in the past, villagers will need to pool donations to mount a 6.09-meter (20 feet) lantern that is fitted with 10,000 bulbs and runs on a local invention called rotors, she said.

The giant lantern of the northern village of Telabastagan, made by Arnel Flores, is the defending champion. Sixth-generation lantern makers and a woman lantern maker are in the game.

The grand prize is P150,000, which is about a fourth of the total production cost. “It is the bragging right to have made the brightest, most beautiful lantern that our artisans are really after,” Pangilinan said.