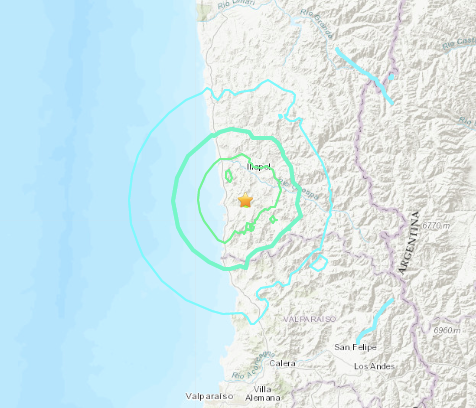 SANTIAGO, Chile  — A strong earthquake caused buildings to sway in Chile’s capital on Monday as thousands of people marched in the city’s center to demand better social services and less economic inequality.

There were no immediate reports of damages from the quake and the navy discounted any threat of a tsunami.

The U.S. Geological Survey put its preliminary magnitude at 6.0 and said its epicenter was located 17.4 miles (28 kilometers) southwest of Illapel, Chile near the country’s central coast. It had a depth of 49 kilometers.

Authorities in Chile said the quake was felt in the country’s capital and central cities. It struck amid the latest in a wave of protests against the government of President Sebastián Piñera. The unrest has forced the cancellation of two major international summits, and left at least 20 people have died in violent clashes, looting and arson.

Chile is located in the so-called “Ring of Fire,” which makes it one of the most seismic countries in the world. An 8.8-magnitude quake, one of the strongest ever recorded, and the tsunami it unleashed, killed more than 500 people, destroyed 220,000 homes and washed away docks, riverfronts and seaside resorts.

Read Next
US tells UN it is pulling out of Paris climate deal
EDITORS' PICK
10 Filipinos positive for COVID-19 in UK, 7 in Ireland — envoy
Nograles: Cabinet members to donate 75% of monthly salary to aid COVID-19 fight
Quick chat with Nicole Andersson: ‘You really don’t need much to be happy’
IATF to LGUs: Issue ordinances vs attacks on frontliners, COVID-19 patients
Diokno to Duterte: OK to make fun of buck tooth, but focus on people’s needs first
Robredo spox thanks Duterte for defending VP’s efforts vs COVID-19
MOST READ
Coronavirus hotbed Rizal to shut borders on April 6
Sotto on Isko Moreno’s call: We do our job without the media following our every move
ADB warns PH against prolonged lockdown
Gov’t mulling quarantine period extension of 15-20 more days
Don't miss out on the latest news and information.