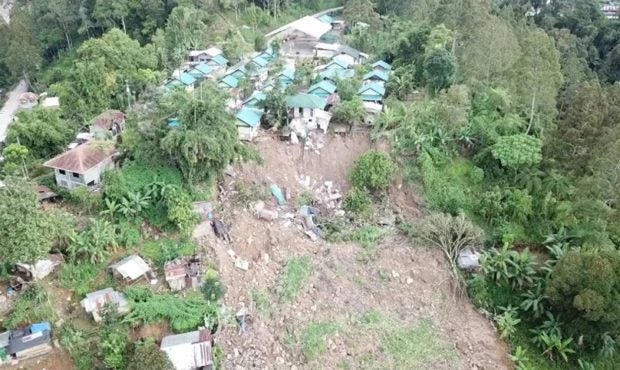 Drone photo of the Energy Regulatory Corp. relocation site at the village of Ilomavis in Kidapawan City. A landslide struck the area at the back of this row of houses at the height of the quakes. PHOTO FROM MINDA

KIDAPAWAN CITY—The agency serving as Malacanang’s extension in Mindanao, Mindanao Development Authority (MinDA), has released drone images of the extent of damage of a swarm of earthquakes that struck the provinces of Cotabato and Davao del Sur.

MinDA also set up a field office in this city to coordinate government relief and rehabilitation efforts.

The drone images showed also communities that had been stricken by landslides and could be declared no man’s land later.

Pinol said his office continued to gather data on Monday, Nov. 4, and to identify which communities had not been reached by government relief efforts.

He said with the help of local government units, MinDA would also form a data base of all quake survivors and the extent of damage they suffered from the quakes which started wreaking havoc last Oct. 16.

The data gathered, he said, would be used to help design rehabilitation plans for communities stricken by the quakes and submitted to Defense Secretary Delfin Lorenzana.

Lorenzana is administrator of martial law in Mindanao and had been designated by Executive Secretary Salvador Medialdea as officer-in-charge of government operations to help the quake survivors. /TSB