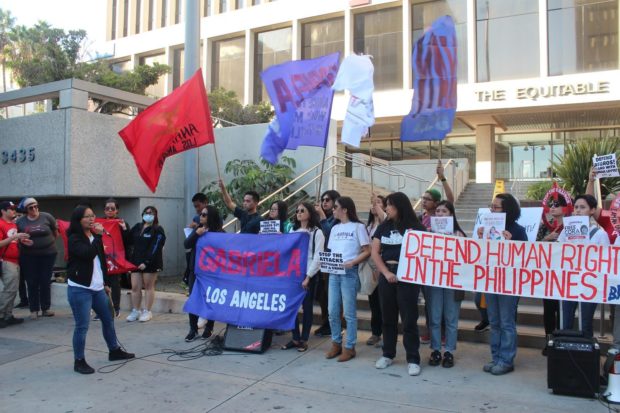 US-based protestors rally in front of the Philippine consulate in Los Angeles to decry the arrest of 57 members of progressive groups in Negros Occidental. CONTRIBUTED PHOTO

BACOLOD CITY – Police filed charges of illegal gun and explosives possession and human trafficking against 44 activists who were arrested in the cities of Bacolod and Escalante in Negros Occidental province.

The filing of the charges was likely to keep the activists detained. Capt. Cenon Pancito, Army 3rd Infantry Division public affairs officer, said the offenses the activists were charged with were nonbailable.

At least three of the 15 activists were initially thought to be minors but they turned out to be of legal age.

A government task force, formed specifically for counterinsurgency, had claimed that the 55 men and women arrested in Bacolod City were communist rebels operating in the provinces of Negros, Cebu, Bohol and Siquijor.

The arrests were met by protests in Cebu City on Monday, Nov. 4, by other activists who are demanding the release of their fellow activists.

Arresting the activists, he said, was part of a campaign to silence and threaten critics of President Rodrigo Duterte.

Evidence against those arrested was planted, Ruiz said.

He admitted that the arrests had a chilling effect on other activists in Negros and other provinces. But he said progressive groups would continue to protest what Ruiz said were oppressive government policies.

“If they did it in Negros Occidental, they could do it also to us here in Cebu,” Ruiz said.

In the United States, rights activists rallied in front of the Philippine Consulate to protest the mass arrests in Negros Occidental.

Joyous Prim, national officer of the International Coalition for Human Rights in the Philippines, said the human rights activists were just fighting for the rights of sugar workers and farmers.

“Claims that the arrest had to do with rebels entering Bacolod are all lies,” she said.

“These are legal activists who are our friends, who hosted us while we were there and are respected, long time human rights defenders,” she said.