Bong Go assists quake victims in Kidapawan City and Makilala, North Cotabato; calls for gov’t and public to work together to help victims 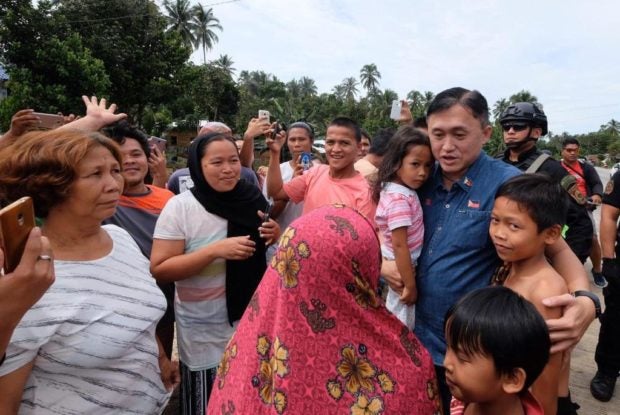 Photo from the office of Senator Bong Go

Senator Bong Go distributed grocery packs and financial aid on Monday, November 4, at the towns that were hit hardest by the subsequent 6.6- and 6.5-magnitude earthquakes that rocked North Cotabato and other parts of Mindanao on October 29 and 31, respectively. An earlier strong quake with a magnitude of 6.3 first hit the same areas last October 16.

Straight from Thailand where he accompanied President Rodrigo Duterte for the 35th Association of Southeast Asian Nations (Asean) Summit, Bong Go first visited victims in Kidapawan City who are temporarily staying at the evacuation center in Brgy. Ilomavis before riding a motorcycle and proceeding to Makilala, North Cotabato to likewise provide various forms of assistance.

In Kidapawan and Makilala, Bong Go commiserated with the victims, saying that his office is always open to help them and listen to their concerns.

The senator was also accompanied by representatives from concerned government agencies to provide additional assistance to the disaster-stricken Filipinos. Private entities also sent their assistance through Bong Go’s office.

As for their housing needs, Bong Go said that he has coordinated with the National Housing Authority (NHA) for the rebuilding and repair of the houses of the victims. He urged the NHA to provide a long-term housing plan for victims of natural disasters.

He also encouraged the residents, especially those who are injured or in need of medical attention, to go to the nearest Malasakit Center so they can avail of government assistance for their healthcare needs.

In a November 3 report by the National Disaster Risk Reduction and Management Council (NDRRMC), authorities said that at least 22 casualties have been confirmed from the disasters. Sixteen are from Cotabato, three in Davao del Sur, two in South Cotabato, and one in Sultan Kudarat.

Wary of fake news in times of calamities, Bong Go advised the public to rely on legitimate sources of information when sharing news on social media.

As to reports that the continuous earthquakes have damaged many structures, Bong Go said that government agencies should be strict in implementing the law, particularly the National Building Code which the Senator plans to revisit and propose necessary amendments to ensure safety amid recurring natural disasters, such as earthquakes.

The National Building Code was promulgated in 1977 when then president Ferdinand E. Marcos issued Presidential Decree No. 1096. Senator Bong Go recognizes that there may be a need to amend the law and make it updated with the demands of the 21st century and with the increase in strength and frequency of natural calamities, such as earthquakes and typhoons.

Bong Go also said that he will talk to the Department of Health to install portalets in evacuation centers and ensure proper sanitation in the temporary shelters. This will prevent outbreaks of diseases in cramped areas.

The Senator also called on the Philippine Institute of Volcanology and Seismology (PHIVOLCS) to heighten its information drive and make essential information, such as location of fault lines scattered around the country, more available to the general public. Bong Go said that he will talk to PHIVOLCS officials on how to further enhance their capabilities in fulfilling their mandate.

In line with this, Bong Go reiterated his proposal for the establishment of a separate executive department focused on disaster resilience to serve as the lead agency for disaster response and preparedness of the government.

The department aims to provide faster government response to natural disasters and calamities, such as typhoons and earthquakes, by putting together all related agencies under a single department. The proposed measure also mandates local government units to build permanent and dedicated evacuation centers that are comfortable and complete with all necessary supplies needed by evacuees.