ROME – An Italian offshore supply vessel has brought 151 migrants to Sicily after rescuing them in waters off Libya a day earlier. 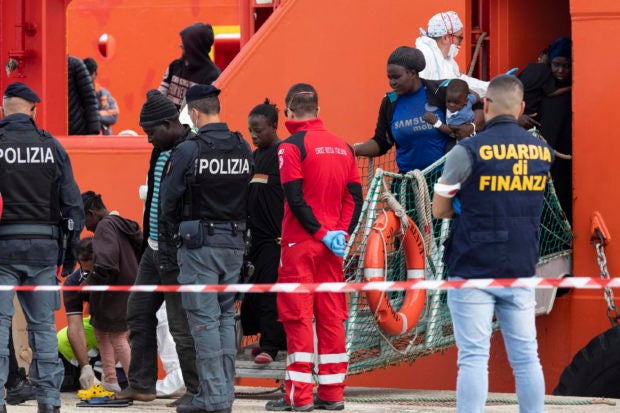 Migrants disembark from the Asso Trenta ship, docked in the port of Pozzallo, Italy, Sunday, Nov. 3, 2019. An Italian offshore supply vessel has brought 151 migrants to Sicily after rescuing them in waters off Libya a day earlier. (Francesco Ruta/ANSA via AP)

The Asso Trenta docked Sunday at Pozzallo with the migrants. It wasn’t immediately known if they would stay in Italy or be distributed among other European Union countries.

Hours earlier, a German charity’s rescue boat, Alan Kurdi, had disembarked 88 migrants at Taranto on the Italian mainland. Under an EU-brokered deal, 67 of them will go to four other countries, while the others will stay in Italy.

A Taranto official, Gabriella Ficocelli, told the Italian news agency ANSA the migrants included five unaccompanied minors who were “tired and tried by the voyage.” They disembarked eight days after being rescue in the Mediterranean Sea from Libyan-based traffickers’ unseaworthy vessels.

Meanwhile, the Greek government’s decision to transfer migrants from the overcrowded eastern Aegean islands to the mainland was met with some resistance. Local residents, in two instances, tried unsuccessfully to prevent migrants from being housed in hotels in northern Greece.

An anti-migrant march in the northern city of Thessaloniki on Sunday was attended by around 100 people, while a counter-demonstration of anarchists drew a slightly larger crowd.

Migrants who had arrived by military transport from the island of Lesbos to a port near Athens on Saturday had to wait hours in buses in order to be able to finally sleep at designated hotels whose owners agreed to lodge the migrants.

The migrants were driven in buses for more than 500 kilometers (310 miles) to reach their destinations in northern Greece.

In an unrelated incident, a van carrying an estimated 15 Pakistani migrants turned over on a main highway east of Thessaloniki Sunday, killing one and slightly injuring five. The police weren’t certain about the exact number of migrants because the others, including the driver, fled the scene before police arrived.

In North Macedonia, a court ordered a 30-day pre-trial custody for three Pakistani nationals, suspected of human trafficking and cruelty to migrants.

The Skopje’s prosecutor office announced Sunday they have opened a probe against three Pakistanis and one Macedonian national for organizing the illegal transfer of migrants and abusing them. The Macedonian national, owner of the house, was placed under house arrest.

Police raided a house in the village of Vaksince, near the northern border with Serbia, on Friday and found 12 migrants from India, Pakistan and Afghanistan, including two minors. They acted on a tip from Serbian police who had been alerted by a friend of the migrants that they were being beaten and asked to pay 1,300 euros ($1,450) each to the smugglers for transfer across the border. /gsg