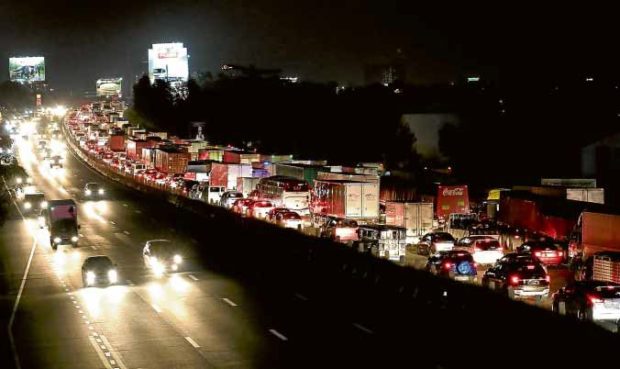 ALL BECAUSE OF THIS The technical working group of the Toll Regulatory Board (TRB) has recommended a “refund” of P44 in the toll collected from Metro Manila-bound motorists due to the kilometers-long traffic gridlock on SLEx caused by the Skyway extension project in Muntinlupa City. —RICHARD A. REYES

MANILA, Philippines — San Miguel Corp. (SMC) president Ramon Ang said over the weekend that toll cuts at the South Luzon Expressway (SLEx) were “unwarranted,” warning this would erode investor confidence in the conglomerate that taps outside financing for its big-ticket infrastructure projects.

Ang issued the warning after the technical working group (TWG) of the Toll Regulatory Board (TRB) recommended a “refund” of P44 in the toll collected from Metro Manila-bound motorists due to the kilometers-long traffic gridlock on SLEx caused by the Skyway extension project in Muntinlupa City.

A 4-kilometer elevated highway will be built from Barangay Cupang to Barangay Putatan and will run parallel to both sides of SLEx.
‘Knee-jerk reaction’
In a statement, Ang said his company’s P10-billion Skyway extension project was a “bold, new, long-term solution” that would deal with the worsening road congestion in southern Metro Manila.

“We understand the knee-jerk reaction is to ask for something in return for a slight inconvenience,” Ang said. “It’s a populist idea. But I hope those pushing for this understand and see the bigger picture.”

Raymundo Junia, a private sector representative on the road board, said on Sunday that TWG members had agreed to adopt his proposal to lower the toll for the northbound portion of SLEx at a meeting on Oct. 31.

Junia, who heads the TWG, said the proposed toll reduction would be formally presented at the next meeting of the five-member TRB, chaired by Transportation Secretary Arthur Tugade, on Nov. 7.

He said the rebate was “justified” because travel time of motorists and commuters going to Metro Manila had become longer by more than an hour since construction for the Skyway extension started on Sept. 24.

“The board will still have to decide whether or not to approve the proposal to [reduce toll],” Junia told the Inquirer.

He said the amount was a “refund” for the services that SMC Tollways had failed to deliver to motorists.

“It’s just like buying a bottle of beer from a store. If the buyer paid P50 but the store owner failed to give him the bottle of beer, what should happen next? The buyer should get a refund, right?” he added.

Junia said the adjustment was based on the average toll that motorists pay for using the 8.3 km stretch of the northbound lane of SLEx from Susana Heights exit to Sucat exit, both in Muntinlupa — the area most affected by the traffic jam.

Ang said lower toll was not the solution.

“It will make the problem worse. More vehicles will flood the expressways, and nobody will be happy because of the increasing congestion,” he said.

Ang rejected any suspension of toll collection, saying this will violate its concession agreement and damage its standing with lenders, which SMC taps to finance big-ticket infrastructure projects.

“If banks see that [the] government can just stop honoring concession contracts, they will also stop lending to local companies. Investor confidence will go down,” Ang said.

He also pointed to some P7 billion in forgone revenues accumulated since 2012 for toll adjustments “that were never granted.”

Toll increases are part of the contract and are needed to recover investments, Ang said.

“Suspending toll now would be like punishing a company that, despite still having billions in receivables, has taken the initiative to invest another P10 billion to solve Alabang traffic, once and for all,” he said.

He argued that “responsible investors” would even support efforts to protect consumer rights.

As to Ang’s argument that a lower toll would increase the volume of traffic on SLEx, Junia said this was “another fallacy” since there was “no other respectable road” connecting Calabarzon (Cavite, Laguna, Batangas, Rizal and Quezon) provinces to Metro Manila.

Ang acknowledged that road congestion significantly worsened after SMC closed the outermost portion of SLEx at-grade level, just after the Alabang viaduct, to make way for the Skyway extension project.

“We’ve owned up and I personally apologized to the public. We’ve also set clear targets as to when various stages of the work will be completed. I feel that most people are reasonable, and they see that this project will help them,” he said.

The businessman has assured the public that traffic flow on SLEx will “return to normal” by Dec. 1, when heavy equipment will have been cleared from a northbound stretch of the road after the Alabang viaduct.

He said the traffic on SLEx heading to Alabang was due to the toll road’s original design limitations when it was built by the former concessionaire.

From Susana Heights, SLEx has five lanes, but at the Alabang viaduct, this narrows to just three, creating a bottleneck.