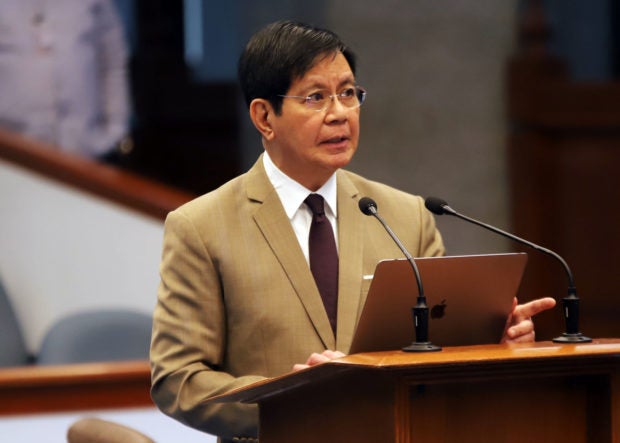 MANILA, Philippines — About P20 billion worth of questionable projects have been “parked” in several departments in the final version of the proposed P4.1-trillion national budget for 2020 that the House of Representatives transmitted to the Senate last month, Sen. Panfilo “Ping” Lacson said on Sunday.

Lacson, whose exposés had defatted the government’s annual spending program of billions of pesos in pork, said the suspicious allotments could not be regarded as pork since these were already present in the National Expenditure Program (NEP) that Malacañang had submitted for congressional approval.

Among the projects that the senator flagged was the P500-million rehabilitation of Kennon Road, which connects Baguio City to lowland areas of northern Luzon.

The issue of budget “parking” came to the fore last year when allies of then Speaker Gloria Macapagal-Arroyo accused each other of tinkering with the P3.757-trillion national budget for 2019.

Parking of funds refers to allocations that are initially placed in a certain legislative district or department before these are siphoned off to a favored district or projects chosen by legislators.

In a landmark ruling in 2013, the Supreme Court banished the pork barrel Priority Development Assistance Fund from the government’s budgeting system for flouting the 1987 Constitution.

These lump-sum allocations had not only been used by legislators as largesse in promoting patronage politics, but also as a major source of kickbacks since these allowed postenactment interventions.

According to Lacson, he and members of his staff discovered the dubious items while scrutinizing the budget documents contained in the 2020 General Appropriations Bill, which the Senate received just before it went on a monthlong break.

He said half of the P20-billion parked allocation was lodged in the Department of Public Works and Highways (DPWH) budget.

“We noticed that some of the [budget] items did not clearly state where the funds would go. This amounted to more or less P20 billion in our estimate,” Lacson said in a radio interview.

“These were ‘parked’ in various [departments]. Some were in the DILG (Department of the Interior and Local Government) and, as usual, in the DPWH,” he continued.

Moreover, the senator said even officials of the departments where these projects were listed admitted that they had no knowledge how these were approved.

Some of the projects, he added, were earmarked with lump-sum allocations, a clear violation of the Supreme Court’s 2013 ruling.

“[But] these are not pork. Under the definition of pork, if the items are already in the NEP, the implication or assumption is that these were vetted properly by the agencies,” Lacson said.

“As I have said, we noticed that it’s not clear where these funds will be used. And when we asked the [department officials] during the committee hearings if they knew where the money would be spent, they replied, ‘We don’t know,’” Lacson said.

He said while the House version of the annual government spending plan was generally the same as the one that the Department of Budget and Management (DBM) had presented, it was a common practice for congressmen to make individual amendments for their districts.

Lacson, whose antipork advocacy has made him unpopular among House members, said the Kennon Road rehabilitation project was included in the P10 billion worth of questionable items in the DPWH budget.

“Where is [the project exactly]? We don’t even know the [scope of work]. It should have identified the project from what kilometer up to a certain kilometer. It should be itemized,” he said.

“This is a half-a-billion-peso project and you can say that it has a largely general description. You don’t know where it is so [it’s possible that] it will not be implemented,” he said.

There were also allotments, such as the infrastructure project in Cagayan province, that were covered by mere “requests” and appeared to have been done like “cut and paste,” he added.

“How can you implement a request? So this could be a lapse on the part of the DBM or the agency itself because it looked like it was made using ‘cut-and-paste’ by whoever is the [district] representative there,” Lacson said.

“It was not converted into an actual project complete with description,” he said. “It just mentioned that it was a request for repair construction of a road segment. It’s either they rushed it or they overlooked because there were tens of thousands of projects.”

Despite these alleged irregularities, Lacson said the leadership of Speaker Alan Peter Cayetano, his former colleague in the Senate, was the “most behaved” under the Duterte administration.

He said the budget realignments amounting to P9.5 billion were all “institutional amendments” intended to bankroll the National Food Authority’s purchase of rice and to implement the Universal Healthcare Act.