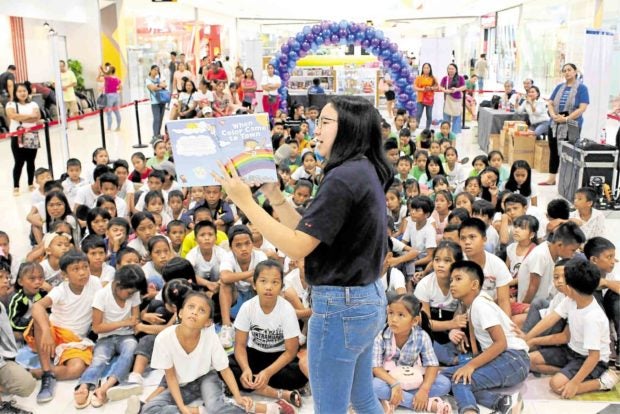 TACLOBAN CITY, Leyte, Philippines — Eleven-year-old Rhelyn Bustamante was already up before 6 a.m. on a Saturday.

This Grade 6 pupil of San Jose Central School could barely contain her excitement to attend her first read-along session with children from other schools.

And she was not disappointed.

She didn’t only meet new friends but she also enjoyed the three stories during the Inquirer’s Read-Along session on Oct. 26, at Robinsons Place North in Abucay District.

One of the stories was read by Jiann Amber Yaokasin, a literary advocate who donated more than 10,000 of her books to the school when she turned 18 three years ago.

Yaokasin read the story, “When Color Came to Town,” written by Susan dela Rosa Aragon, about the town of Alikabok which didn’t have any color since it was covered in dust after the residents became too lazy to clean their own place.

One day, a man arrived at their hometown and showed them the colors hidden under the dust.

“I’m grateful I got to bring life into words and hopefully bring joy and inspire students to love stories and reading so they could open their mind to new ideas and become lifelong learners,” Yaokasin said.

Bustamante said she “liked the stories shared by the readers and I am lucky and happy to be among the students to attend the read-along.”

Many of these schoolchildren, enrolled from Kinder to Grade 6, came in their school uniforms.

Inquirer marketing officer Mona Khalil-Maceda said the Tacloban crowd was one of the biggest in the Inquirer Read-Along—which marked its debut in this provincial capital of Leyte.

The Inquirer also held a photo exhibit in the shopping mall, which featured 43 photos showing what Tacloban looked like after the onslaught of Supertyphoon “Yolanda” on Nov. 8, 2013, and six years later.