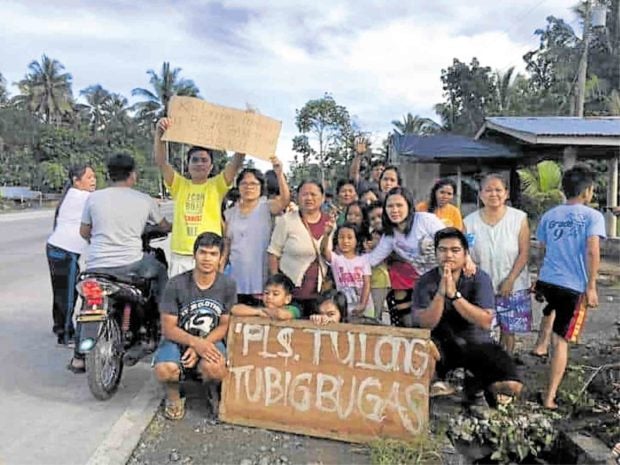 IN URGENT NEED Earthquake evacuees in Makilala, North Cotabato province, take to the roadside with signs appealing for food and potable water on Saturday. —WILLIAMOR MAGBANUA

MAKILALA, Cotabato, Philippines — Scores of villagers displaced by three recent earthquakes that struck Mindanao were growing desperate for help and have taken their appeal for aid to roadsides as the government and private groups struggled to distribute relief goods to stricken areas, some cut off by landslides.

At Barangay Malasila in Makilala, Cotabato province, groups of residents held up signs in English and the local language pleading for supplies, specifically rice, water and medicine, to people passing through their communities.

Some received money from travelers on the highway that links Cotabato to Davao City.

Several Malasila menfolk said they returned to their homes to gather root crops, like sweet potatoes or bananas, that they could take back to their families to eat in their roadside tents.

They said the quakes had cut off water supply from traditional sources like deep wells and springs.

Many of the villagers, including members of the Manobo tribe, already were living hand-to-mouth as rubber tappers before the disaster struck and were now out of work and have no money to buy food at the market in the town center several kilometers away.

Some netizens posted photos and comments on social media to support the villagers’ appeal for help.

“No more food available in our place, we no longer have rice, our water sources had dried up after the earthquake,” Shiena Mae Villeza said in a Facebook post.

“For all who responded to our appeals, our endless appreciation for your help,” Villeza said, adding: “Your generosity will be reciprocated by God.” 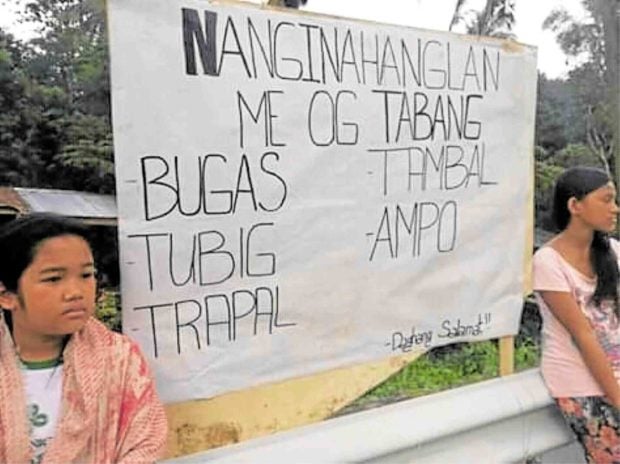 TARPS, TOO Aside from food and water, residents displaced by the earthquake in Makilala, Cotabato province, are asking for tarpaulin sheets, or “trapal,” a material suddenly in demand for evacuees who need to put up tents. —CONTRIBUTED PHOTOS

The death toll from the second and strongest quake, a 6.6-magnitude on Oct. 29, had risen to 14, bringing the number of fatalities from the three quakes to 22, based on a report on Saturday by the National Disaster Risk Reduction and Management Council (NDRRMC).

The NDRRMC said more than 146,700 people from nearly 150 villages in central Mindanao and nearby Davao region were affected. Up to 20,635 were housed in temporary government shelters and 6,850 others were staying with relatives in safe areas, it said.

Many structures, including homes and buildings damaged by a 6.3-magnitude temblor on Oct. 16, were declared off-limits following the Oct. 29 quake and the 6.5-magnitude quake that struck two days later.

All the three major quakes and scores of aftershocks were centered near Tulunan, Cotabato, and caused by the movement of the Cotabato Fault System, according to the Philippine Institute of Volcanology and Seismology (Phivolcs).

The Department of Social Welfare and Development was coordinating with the military to fly relief supplies, including rice, food packs, sleeping kits and tents made of tarpaulin, the NDRRMC said.

Red Cross volunteers, including actress Angel Locsin, were seen distributing food, water and other relief supplies in Malasila and the village of Batasan, also in Makilala.

In a tragic turn, a man stabbed and killed his neighbor in a scuffle over possession of a piece of tarpaulin at Barangay Indangan in Makilala.

Village chair Napoleon Inggo on Saturday said the victim, Michael Danga, 21, was preparing to put up his tent on Friday in front of the barangay hall when the suspect, Eric Matango, 40, a Dole Stanfilco worker, accused the latter of allegedly taking his tarpaulin.

A fight ensued ending in the death of Danga, Inggo said.

The local aid delivery system has been hampered because many of the barangay officials in the quake-hit towns were also quake victims themselves.

In Digos City, the local government said the homes of at least 130,000 people, about 65 percent of the population, had been destroyed or damaged by the quakes.

Most residents, fearing aftershocks, have refused to sleep in their homes at night. Those who lost their homes prefer to pitch tents in open fields and others set up temporary shelters close to their damaged houses. Some sleep in hammocks under the trees.

Due to the sharp rise in demand, the price of tarpaulin has doubled.

Digos Mayor Josef Cagas said he was seeking ways to make tarpaulin one of the essential items subjected to price freeze during calamities.

Acting Budget Secretary Wendel Avisado said funds were already available for release to the quake-hit areas. In case they were not enough, local governments should request for more money from the national government, he said.

“Departments have quick response funds, and that’s what they are currently doing—they are downloading funds to their regional, provincial and city offices to fast-track the government’s response,” Avisado told reporters in a text message on Saturday.

The Department of Finance had already asked all treasurers and assessors of earthquake-affected local governments “to submit their estimates of the damages so we can determine the amount required,” Finance Secretary Carlos Dominguez III said in a Viber message to reporters also on Saturday. 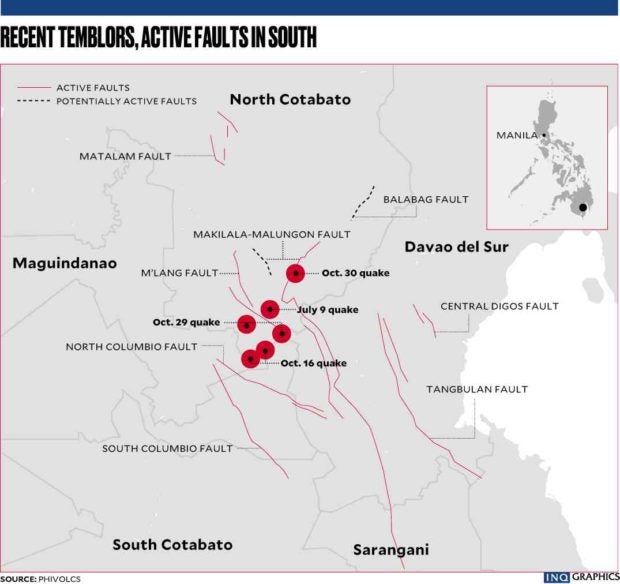 Executive Secretary Salvador Medialdea, who is the government’s officer in charge while President Duterte is attending the Association of Southeast Asian Nations summit in Thailand, has directed Defense Secretary Delfin Lorenzana to lead all earthquake relief efforts.

“The public is advised to coordinate directly with the [Department of National Defense] and/or National Disaster Risk Reduction and Management Council to ensure the efficient conduct of relief efforts, including the distribution of relief goods and rescue operations,” he said.

At the Senate, Sen. Sherwin Gatchalian on Saturday called on the Department of Budget and Management (DBM) and the Department of Education (DepEd) to immediately augment the DepEd’s quick response fund (QRF) to quickly resume normal school operations in towns affected by the quakes.

He said the DepEd’s P2-billion QRF this year had already been depleted by rehabilitation needs from last year’s disasters.

According to Gatchalian, the additional QRF funds for DepEd can be sourced from the rest of this year’s National Disaster Risk Reduction and Management Program’s P20-billion allocation.

The Philippine Daily Inquirer has joined efforts to extend comfort and assistance to families affected by the earthquakes in Mindanao.Cash donations may be sent to the Inquirer Foundation Corp. through its Banco de Oro (BDO) current account No. 007960018860. Donors may also inquire with the Inquirer’s corporate affairs office through email at [email protected]