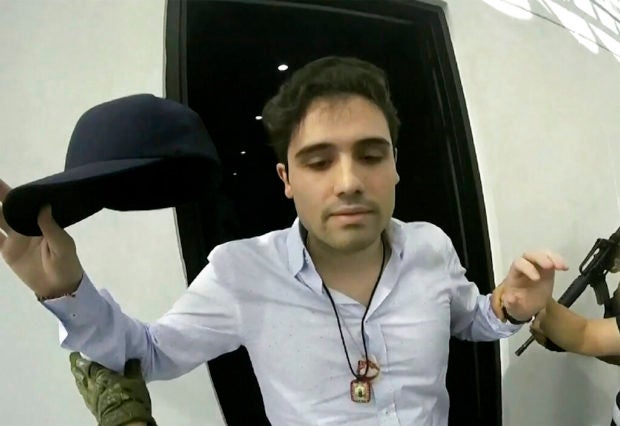 This Oct. 17, 2019 frame grab from video provided by the Mexican government shows Ovidio Guzman Lopez at the moment of his detention, in Culiacan, Mexico. (CEPROPIE via AP)

MEXICO CITY  — What really interested United States authorities in a son of imprisoned drug lord Joaquin “El Chapo” Guzmán — who was detained and then freed amid a cartel uprising — was his fentanyl business, Mexican security officials said Friday.

Ovidio Guzmán López was indicted in a U.S. federal court on charges of trafficking cocaine, methamphetamine and marijuana and Mexican officials were trying to arrest him last month for extradition. There was no mention in that indictment of the synthetic opioid ravaging U.S. communities.

But Mexican Public Safety Secretary Alfonso Durazo said, “Precisely one of the reasons for the (U.S.) interest and that supported the extradition order was the alleged tie between this alleged criminal with the importation of fentanyl to the United States.”

Durazo added that Mexico is cooperating with a number of countries and agencies to get a handle on the country’s growing role in the international fentanyl trade.

On Wednesday, Defense Secretary Luis Cresencio Sandoval characterized Guzmán as “among the main (people) who move drugs to the United States in the area of methamphetamines and fentanyl.”

On Oct. 17, Mexican security forces captured and later released Guzmán in a failed operation spurred by the U.S. extradition request.

Thirteen people were killed in gunbattles around Culiacan that caught authorities by surprise and prompted them to free the suspect in order to end the bloodshed.

The younger Guzmán had maintained a relatively low profile, at least in comparison to some of his brothers, and was almost unknown in the Sinaloa state capital.

His half-brothers Iván and Alfredo, known as the “juniors,” appear more frequently in the press and even have songs written about their exploits.

Ovidio Guzmán first drew attention in 2012, when the U.S. Treasury included him on a chart as a member of his father’s criminal organization. He was only 21 at the time.

His older brother Edgar Guzmán López was killed in 2008 during a feud between his family and the Beltrán Leyva family. His other brother Joaquín was named in the same U.S. indictment with Ovidio.

Two covert fentanyl labs have been found in the Culiacan area this year, one in April and most recently another one in August.

Much of U.S. fentanyl originates in China, but is pressed into pills in Mexico and smuggled into the U.S. The relatively recent appearance of labs suggests the cartels are importing precursor chemicals and then producing the fentanyl themselves.

In September, the U.S. Drug Enforcement Administration travelled with federal, state and local law enforcement officials from Alabama on a “covert” fact-finding trip to Culiacan. A statement released by the DEA days later noted “the profit margins for fentanyl and methamphetamine are driving the drug trade by the cartels.”

On Friday, Mexico’s Navy Secretary José Rafael Ojeda confirmed that the Navy had flown the Americans to Culiacan aboard one of its helicopters. But while he acknowledged that fentanyl often comes to Mexico from China, he said Mexico had not seen a direct tie between China and the cartel.

Asked whether Mexican authorities knew where Guzmán was now, Durazo said only that intelligence work continued.