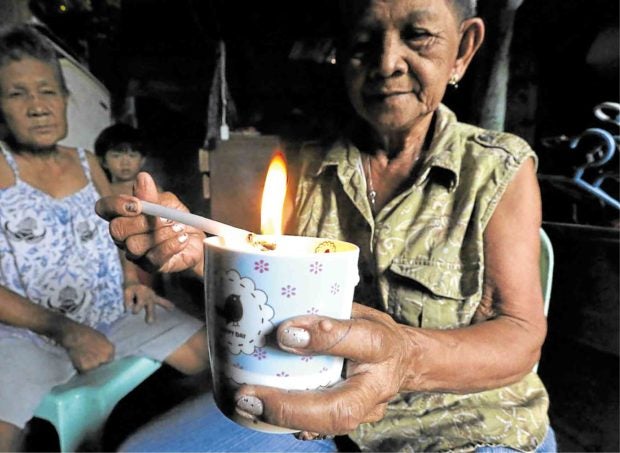 A manggagamot, or healer, in the town of Lian in Batangas for 42 of his 67 years, Mang Jose says it is a “duty” given him by the Black Nazarene. “Binigyan niya ako ng katungkulan ,” he says of “Maestro,” who appeared to him in his dreams, holding a pencil and drawing symbols on his forehead.

Through the years, the pencil has given way to the red ballpen.

Mang Jose says he asks Maestro what he should do and what treatment to apply, and he is told through the “instrument.” By drawing imaginary lines on a person’s forehead, he says, he is able to identify the ailment.

For the treatment, he administers hilot, or massage. He dabs oil on small pieces of paper and makes something out of the shapes that appear, which, he says, can explain what is disturbing the person.

He plasters these pieces of paper onto the person’s body and prescribes herbal concoctions to drink. In some cases, he requires that a prayer be said and an offering be made to unknown entities.

One of his patients is Rowena Manalo, 32.

Manalo’s family believes in faith or natural healing because of many experiences of having been healed.

“We also consult doctors, but usually, we bring our children first to an albularyo (faith healer),” she says.

Recently, Manalo’s son had a fever and a skin disturbance. She took him to a doctor for checkup and medication, but says these did not ease her son’s condition. So they went to Mang Jose.

The night after their visit, Manalo says, her son’s fever broke. The wounds on his legs gradually healed after she bathed him thrice in water with sampaloc and bamboo leaves.

“There are some things or ailments which doctors cannot explain or cure, but faith healers can,” she says.

However, she says, when the disease is incurable by natural means, healers would advise her family to consult a doctor.

Manalo is among a big number of Lian folks who believe in natural healing.

The presence of these healers “growing up with the people” in the community and administering a practice that has been “passed down from generation to generation” is one of the reasons this type of healing thrives, says Dr. Annabelle Pabiona de Guzman, director general of the Philippine Institute of Traditional and Alternative Health Care (Pitahc).

“You also have to consider, of course, that western medicine is not free and although the [Department of Health] has some free medicine and health centers, these are not available and accessible to everybody,” De Guzman says.

Traditional medicine, according to the World Health Organization, is “the sum total of the knowledge, skill and practices based on the theories, beliefs and experiences indigenous to different cultures, whether explicable or not, used in the maintenance of health as well as in the prevention, diagnosis, improvement or treatment of physical and mental illness.”

The existence of faith and natural healing makes Filipinos “feel motivated” that they “have a stronger chance to get better” because there are choices of treatment aside from the biomedical one, says Dr. Gideon Lasco, a medical anthropologist, professor at the University of the Philippines Diliman, and Inquirer Opinion columnist.

But this can also lead people to avoid consulting medical doctors and, as a consequence, take them away from “much needed treatment,” Lasco says.

But for some Lian residents like Gary Arellano, 51, faith healing does not work. 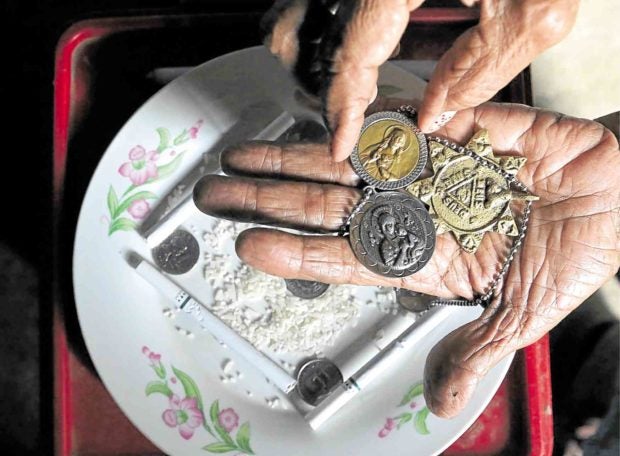 AMULETS Folk healers also use amulets, or “anting-anting,” in their practice.

Arellano says that when he was suffering from appendicitis in his youth, there were only a few doctors in Lian but luckily one was found in the neighboring town and he was able to undergo surgery.

“I was on the brink of death at that time,” he recalls, adding that an albularyo would merely have prescribed tree or plant leaves for his condition. “If I were brought to a healer, he would only say ‘Dahon lang ang gamot dito.’ Thank God, there was a doctor then. I could have died.”

But despite his skepticism toward faith healing, Arellano says he believes in hilot therapy and in the healing substance of certain plants.

Nevertheless, he insists, herbal medicine can only be learned by those who have professional knowledge of it, “not the faith healers.”

Pablito Medrano, also of Lian, counters that belief in faith healing depends on an individual’s experience.

Medrano, 65, points out that Arellano was suffering from appendicitis and already in need of surgery when he was taken to a healer: “But that was his experience. As for me, Lola Maria treated me when my doctors could not alleviate my stomach pain.”

Lola Maria, another healer in Lian, says her gift comes from three dwarves guided by the town’s patron, St. John the Baptist.

It started when she was 7 years old, she says, adding that she can help anyone in need of healing despite her lack of formal education and knowledge.

In the middle of her healing session, people notice her constant belching. She says it is because the three dwarves, which she describes as dressed in white robes and red bonnets, are riding her back, telling her what to do.

She says she uses no particular instrument, only hilot, a few prayers, and the dwarves’ instructions.

“How can scientists and doctors believe these things when they hate people like us?” Lola Maria says. “They might know something we don’t, but we also know something they don’t.”

Lasco sees no reason faith and science should be at odds with each other because, he says, “whether in a healer, a priest or a doctor, trust and faith are very important elements.”

“You need to have faith in the healer, whatever that healer is for you, to follow what they want you to do. So in that sense, faith is essential in medicine,” he says.

Currently, the Pitahc is working on a “scientific and evidence-based” manual for hilot therapy that will be beneficial for blood circulation.

De Guzman says the therapy may be put into practice not just as alternative medicine but also as complementary medicine that can be administered together with western medicine.

“We cannot station all the doctors to remote areas, but if we can train these [healers] on what is scientific and evidence-based, then we can deliver health to all people,” she says.