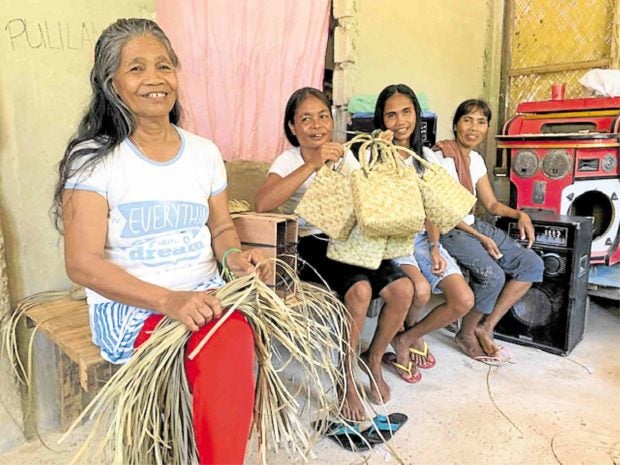 CORON, PALAWAN—The work of the hands binds the Tagbanua women of Palawan province one generation to another.

Traditionally, girls, as young as 12, are taught the indigenous craft of weaving pandan, a tropical plant that grows abundantly in the island village of Malawig in this town.

They make “banig” (sleeping mats) that the women themselves peddle on the streets in the town center, about an hour away by boat.

Boys, on the other hand, are trained early on to fish, the main livelihood in Malawig, whose soil, they say, is not very conducive to grow rice.

“We inherited [this craft] from our ancestors,” Mylene Latube said, her fingers braiding strips of pandan leaves. She uses a small box, made of plywood sheets, as a mold to make a handbag.

Latube, 47, is a member of the Sékéd Pandan Weavers, a group of 44 women from Malawig, whose population mainly belongs to the Tagbanua tribe.

From mats, the women learned to weave handbags, baskets, place mats and other home accessories.

“Sékéd” in their local dialect means “binding or linking.” “It [usually] takes us two weeks to finish one [bag],” said Liezel Bering.

From harvesting, Bering, 33, said the hardest part of the process would be “cleaning” the pandan leaves by manually picking out its tiny thorns.

The leaves are then soaked in saltwater for half an hour before they are left out in the sun to dry for days. They are cut into strips, stretched out, and finally rolled into a coil ready for weaving.

“Look at our palms,” Bering said, holding out her hands, rough and calloused, with tiny scars from years of the handiwork.

But they do it with ease, usually starting at sundown in their homes or on the seashore, after attending to other household chores. 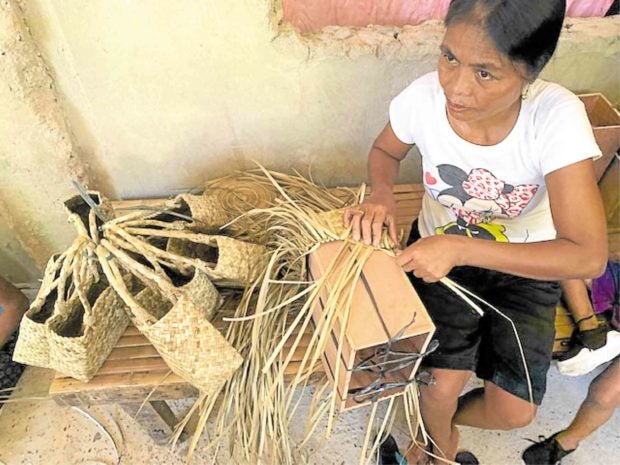 HANDIWORK A member of a Tagbanua tribe in a remote island in Palawan earns a living from pandan weaving. —PHOTOS BY Maricar Cinco

Poorest of the poor

Pandan weaving to them is not only a livelihood but also a pastime on the island where there is not much to do or go to.

Malawig, with 229 households, is an islet in the Calamian group of islands, 457 kilometers north of Puerto Princesa City, the capital of Palawan.

About half of its population are also beneficiaries of the Department of Social Welfare and Development’s (DSWD) Pantawid Pamilyang Pilipino Program (4Ps).

This means they belong to the country’s “poorest of the poor,” based on government standards.

“When people hear of Coron today, they think of it as a tourist destination. But here is the other side, the poor side,” said Paul Echage of 4Ps assigned to the Calamian islands.

Echage said not many people knew how much Malawig was devastated by Supertyphoon “Yolanda” (international name: Haiyan) in 2013 as a storm surge washed out huts and flattened classrooms in the island’s only elementary school.

The tribe sought shelter in the mountains until the sea calmed down, but it lost newborn twins who died due to severe cold.

But it was also the calamity that triggered a tide of aid to Malawig that only in recent years had the classrooms rebuilt, sections of village roads cemented, solar-powered street lights put up, and a steady supply of electricity and water installed.

The DSWD partnered with CordAid and other government agencies in supporting the Sékéd weavers, among other livelihood and social programs.

In its website, CordAid said it aims for the pandan weaving to become a “sustainable ecosystem-based enterprise” in Malawig.

A Sékéd weaver earns about P7,000 monthly for her family. They sell the products, the bag for instance for P250-P300, to the souvenir shops in Coron town proper.

With the support of partner agencies, Sékéd since last year had joined trade fairs in Metro Manila and showcased their products. They earned around P70,000 from a trade fair in Manila last month, the money partly divided among themselves and the rest went to the organization.