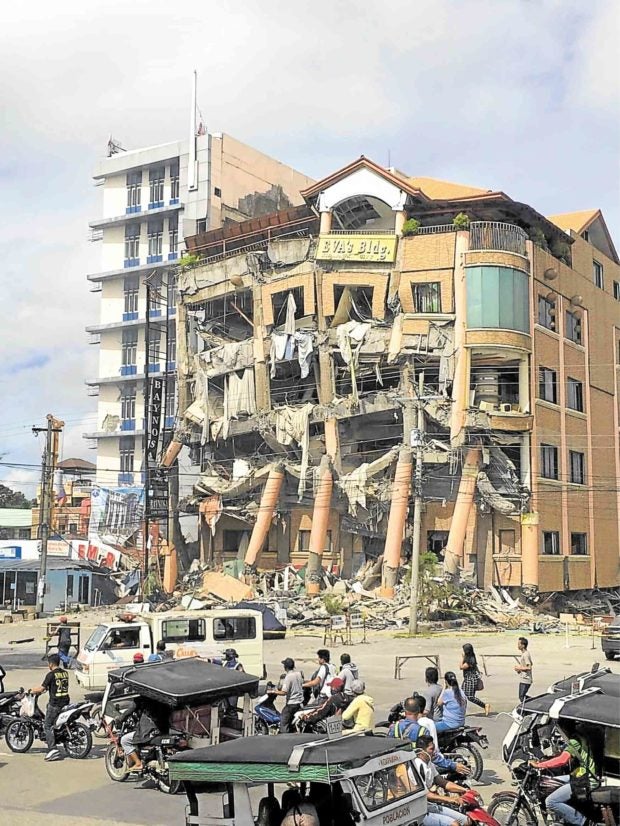 HEARTBREAK HOTEL A 6.5-magnitude earthquake shattered the façade of Kidapawan City’s Eva’s Hotel on Thursday morning. No one was hurt as the building was closed, having been declared off limits after it sustained damage from earlier quakes. —WILLIAMOR MAGBANUA

DAVAO CITY—A major aftershock from a powerful earthquake early this week shook central Mindanao again on Thursday, killing five people and raising the death toll to 18 this month in the region that has been on edge from a series of strong temblors since July.

The 6.5-magnitude quake struck at 9:11 a.m., just two days after a 6.6-magnitude temblor rattled the region and left eight dead.

Thursday’s quake was centered 27 kilometers northeast of Tulunan, Cotabato province, at a relatively shallow depth of 8 km, according to the Philippine Institute of Volcanology and Seismology (Phivolcs).

The Cotabato provincial disaster risk reduction and management division reported that 7-year-old Juve Gabriel, who was hit by falling debris, Batasan village chief Cesar Bangot, who was trapped inside a collapsed barangay hall, and three other people were killed. All five victims were from Makilala, Cotabato, about 10 km away from Tulunan.

A 5.6-magnitude quake in the same area on July 9 did not cause any deaths, but a 6.3-magnitude temblor on Oct. 16 left five dead, officials said.

Thursday’s quake caused further devastation in areas where buildings and homes had been damaged by the previous temblors.

In Davao City, at least two levels of the posh five-story Ecoland 4000 Residences caved in, injuring nine people, including 61-year-old Korean Park Jung-o, according to the City Disaster Risk Reduction and Management Office.

An undetermined number of residents were believed still trapped in the rubble.

The building has 56 rooms from the second to the fifth floors, but only 15 units were occupied at the time, said Police Capt. Nolan Tagsip, city police spokesperson.

“Based on our interview with the security guard, the occupants were able to flee from the property. However, I cannot confirm if there are people left inside,” Tagsip said.

Volunteers and rescuers were able to pull at least eight residents out of the rubble.

Six vehicles were crushed on the ground floor, which was used as parking space.

Mayor Sara Duterte, who visited the site, said the third, fourth and fifth floors had been declared clear after inspection.

Rescue teams were checking the second floor from the windows on the side of the building because they could not go inside the damaged floor for fear it might collapse, she said.

There were also tapping sounds heard from two parts of the building, but rescuers were unsure whether these were made by people trapped inside.

In Kidapawan City, portions of Eva’s Hotel, including its façade, which sustained cracks from previous quakes and aftershocks, collapsed.

No one was inside the building then, said Mayor Joseph Evangelista.

In Digos City, one of the hardest-hit areas in Davao del Sur province, Triple F Store collapsed, injuring two of 36 employees who were hauling merchandise out of the shop.

The earthquake was felt at Intensity 7 in Tulunan, Makilala, Kidapawan and in the towns of Matanao, Bansalan, Magsaysay, Santa Cruz and Digos, the Phivolcs reported. It was Intensity 6 in Davao City.

Based on the Phivolcs earthquake intensity scale, an Intensity 7 could result in destructive shaking of the ground where it would be difficult for people to stand on the upper floors, and heavy objects and furniture are overturned or toppled.

The quake was felt at various intensities in eight other provinces, including Agusan del Sur far to the northeast of Cotabato and Zamboanga del Norte to the west, according to the Phivolcs.

The National Disaster Risk Reduction and Management Council said 398 schools had been damaged by the series of quakes on the Zamboanga Peninsula, Northern Mindanao, Davao region, Soccsksargen and the Bangsamoro Autonomous Region in Muslim Mindanao.

President Duterte, who was at his home in Davao City when the quake struck on Thursday, ordered government agencies to carry out a massive relief program, according to his spokesperson Salvador Panelo.

“The President considers all situations arising from natural disasters that have caused widespread destruction to lives and property a top concern,” Panelo said.

Mr. Duterte flew home to Davao City for All Saints’ Day to visit his parents’ graves before he departs for Thailand to attend the 35th Association of Southeast Asian Nations Summit this weekend.

He was inside the bathroom when the quake struck, according to Sen. Bong Go, his longtime aide.

Go sent pictures to reporters showing cracks on a wall close to a door and the ceiling of the President’s house.

Brig. Gen. Jose Eriel Niembra, chief of the Presidential Security Group, said the President and his family “are OK.”

“They were not asked to evacuate but engineers will be inspecting the structure to make sure that it is still safe,” Niembra told reporters in a text message.

Sen. Ronald “Bato” dela Rosa, who was at his hometown of Bato, Sta. Cruz, in Davao del Sur, said he ran to safety as the ground shook.

“It was as if our house would explode with the intensity of the earthquake,” he said in a radio interview. “I was in the garage talking with my mother. Then it happened. I ran out of the garage to an area without any structure, but I went back for my mother who could no longer run.”

Phivolcs director Renato Solidum told the Inquirer that all three earthquakes since Oct. 16 were generated by the Cotabato Fault System.

“There were numerous earthquakes and there will be aftershocks since the fault system is still moving. Aftershocks follow these strong events,” he said.

Solidum explained that the fault system “disturbed its surrounding, which reacted, like it was pushed and the stress was transferred there.”

Phivolcs reminded the public to inspect houses and buildings, especially those already damaged, to determine whether they could still resist a strong shaking. They should also review their earthquake preparedness response, it added.

Areas highly susceptible to landslides, especially those that were affected by landslides or those with tension cracks, should be avoided or vacated as strong shaking or prolonged rainfall may cause these slopes to slide.

Presidential Communications Secretary Martin Andanar said the President had ordered all government agencies to report on the impact of the earthquake.

In a statement, Andanar said government agencies were also told to ensure public buildings and schools were safe, and to make sure evacuees were moved to safe areas.

Andanar said the President had also ordered the Department of Labor and Employment to report any job displacements in the quake-hit areas and provide assistance to the affected workers.

Labor Secretary Silvestre Bello III said he had sent Undersecretary Ana Dione and Assistant Secretary Benjo Santos Benavidez to General Santos City and Davao City to lead the assessment of the extent of destruction of workplaces and displacement.

“This Sunday, I will personally fly to Davao City to see the extent of the damage and its effect on the employment of our kababayan,” he said, adding that he was bringing along Executive Director Noel Binag of the Occupational Safety and Health Center to conduct the safety assessment of workplaces. —WITH REPORTS FROM JEANNETTE I. ANDRADE, JULIE M. AURELIO, PATRICIA DENISE M. CHIU, ABNER FRANCISCO, ELDIE AGUIRRE, KARLOS MANLUPIG, MART SAMBALUD AND WILLIAMOR MAGBANUA

How You Can Help