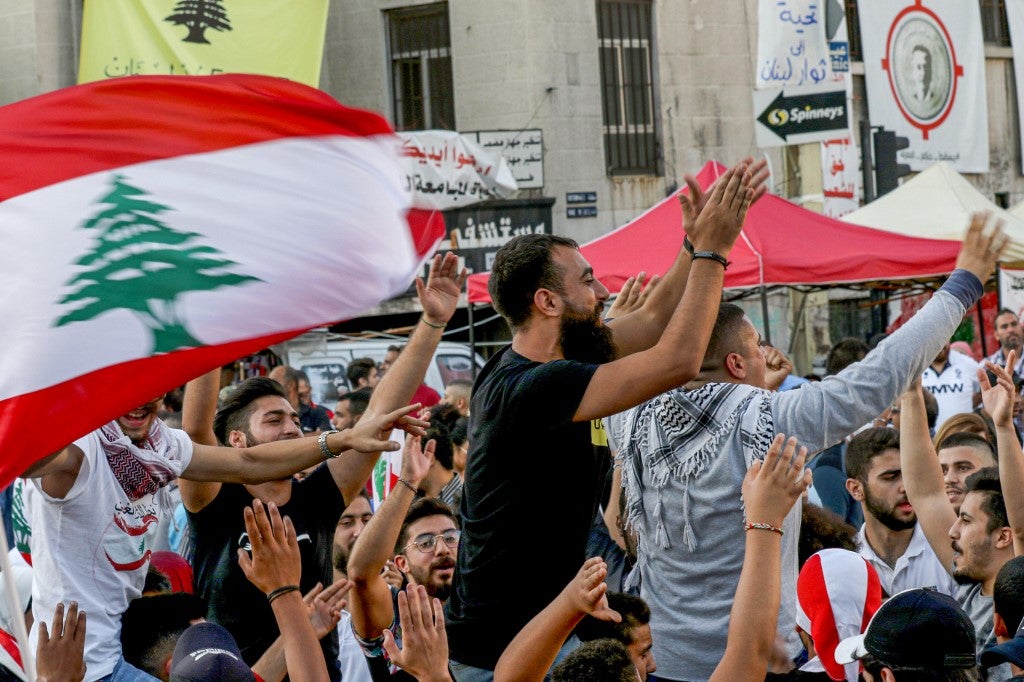 Saad Hariri’s sombre televised address was met by cheers from crowds of protesters who have remained mobilised since October 17, crippling the country to press their demands.

“It has become necessary for us to make a great shock to fix the crisis. I am going to the Baabda Palace to submit the government’s resignation,” said Hariri, who had already stepped down twice from the same post.

He said his decision comes “in response to the will of many Lebanese who took to the streets to demand change”.

The move, the demonstrators’ most significant win yet, will trigger the complicated task of parliament forming a new government — if the president accepts it.

Hariri’s announcement came after days of apparently unfruitful efforts to reshuffle posts within his uneasy coalition, as tension mounted on the ground between protesters and security forces bent on re-opening the country for business.

It also followed clashes between protestors and counter-demonstrators, which sparked fears of deeper civil strife.

In his speech on Tuesday, Hariri said he had reached a dead end, urging the political class to protect the country.

“Hariri is opening the door to a solution because the resignation is the only way for a decent exit from the current crisis,” said Sami Nader, director of the Levant Institute for Strategic Affairs.

After Hariri’s announcement, protestors across the country erupted in applause.

Hundreds gathered in the northern city of Tripoli — a stronghold of the Sunni prime minister — as well as the southern city of Sidon, from where his family hails.

“This resignation is welcome but it is not enough,” said Tima Samir, a 35-year-old mother of two. “We want the entire system to change.”

Ahed Madi, a demonstrator, said the festive scenes in the city were especially symbolic.

“Saad Hariri is from this city and this city has always embraced him. But today, the people want change,” he told AFP.

Protesters have insisted on a complete overhaul of the country’s sectarian-based governance and celebrated the emergence of a national civic identity.

“The peaceful demonstrations and expressions of national unity over the last 13 days have sent a clear message. The Lebanese people want an efficient and effective government, economic reform, and an end to endemic corruption,” Pompeo said.

While France, one of Hariri’s top allies and Lebanon’s key partner in a crucial $11-billion aid plan, voiced its fears that his resignation “makes the crisis even more serious”.

“The resignation of prime minister Saad Hariri was necessary to avoid sliding into civil strife whose danger we witnessed today in central Beirut,” she said on Twitter.

Prior to Hariri’s speech on Tuesday, counter-demonstrators attacked protesters at two sites, including at a rally near the government headquarters, AFP reporters said.

They had chanted slogans hailing the leaders of two Shiite movements — Hezbollah chief Hassan Nasrallah and Amal head Nabih Berri — as they pushed roadblocks aside and provoked protesters.

“There are political orders to attack. This was not spontaneous,” said one demonstrator, alluding to Amal and Hezbollah, neither of which were spared by protesters, including from their own base.

The protests had otherwise been relatively incident-free, despite tensions with the armed forces and attempts by party loyalists to stage counter-demonstrations.

Lebanon’s political leaders have appeared shell-shocked, trying simultaneously to express sympathy for the movement while warning of turmoil in the case of a power vacuum.

Hariri last week announced a package of economic reforms which aims to revive an economy that has been on the brink of collapse for months, but the move failed to quell the anger in the street.

It has often taken months for Lebanon’s fractious political leaders to agree on a government line-up, a scenario Lebanon’s backers say the country can ill afford.