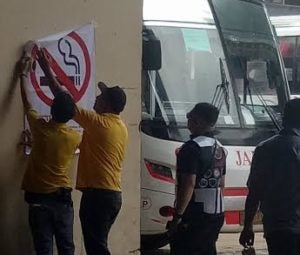 MMDA personnel inspected and posted ‘No Smoking’ signages in bus terminals on Oct. 28, 2019. Photo by MMDA.

The MMDA expects many passengers to troop to bus terminals to go home to their provinces for All Saints’ Day on Nov. 1 and All Souls’ Day on Nov. 2.

Personnel from the agency’s Health and Environment Protection Office (HEPO) and I-ACT inspected the terminal for compliance to the nationwide smoking ban, as set in Executive Order (EO) No. 26.

“As part of the agency’s efforts in promoting a smoke-free environment, our environmental enforcers have posted ‘No Smoking’ signages earlier within the vicinity of bus terminals in Cubao,” MMDA chairman Danilo Lim said in a statement.

“This would serve as a reminder that EO 26 also prohibits smoking on public utility vehicles (PUVs),” he added. 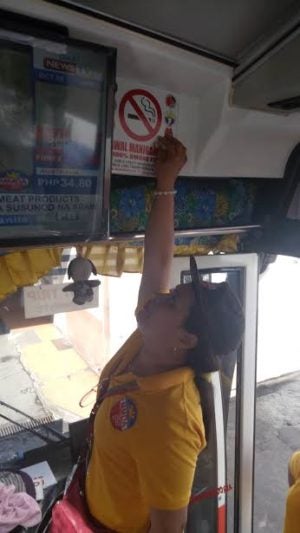 MMDA personnel inspected and posted ‘No Smoking’ signages in bus terminals on Oct. 28, 2019. Photos by MMDA.

Authorities also checked if bus terminals adhere to the implementation of the Department of Transportation’s Joint Administrative Order (JAO) No. 2014-01 — or the Revised Schedule of Fines and Penalties for Violations of Laws, Rules and Regulations Governing Land Transportation.

PUV-related violations include the refusal to give service to the public; failure to display “No Smoking” signs and/or allowing personnel or passengers to smoke inside the vehicle; overcharging and undercharging of fares; employing reckless, insolent, discourteous or arrogant drivers; operating the unit/s with defective parts; among others.

Third and subsequent violators will be fined P15,000 and have their certificate of public convenience canceled.

Among the bus terminals the MMDA said it has inspected were Five Star, Victory Liner, Jam, and Jac Liner.