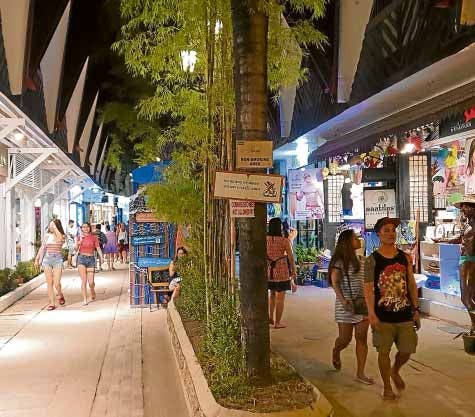 STILL A MALL WORLD AFTER ALL Boracay has come a long way from being a mere sand-and-sea paradise, as shown by its highly commercialized strip known as D’Mall. —NESTOR BURGOS JR.

BORACAY ISLAND, Aklan, Philippines — Spencer Anderson was walking on the main road last March on his way to meet his wife to view the sunset.

The 71-year-old retiree from Canada, who has been living in Boracay for 10 years, stopped briefly across Crafts store near Lake Town to greet friends when suddenly, the ground he was standing on gave way and he fell into a 2-meter-deep hole with protruding pieces of rebar.

He was apparently standing on a piece of thin plywood that covered an excavation on the road, where a sewer construction project was going on.

Anderson had to be pulled out by other residents. He suffered a deep wound below his knee that required seven stitches to close. He was immobilized for weeks.

“It’s negligence on the part of contractors,” he told the Inquirer.

Several other tourists and residents have been injured after falling into road excavations with no barriers or warning signs.

The Department of Public Works and Highways has also covered the unattended excavations.

The upgrading and widening of the 20-kilometer road network on the island, along with the upgrading of the sewer system, are main components of the rehabilitation of Boracay.

The road is designed to be 6 meters wide, with a two-lane carriageway and 2-meter sidewalks on each side. It will also have loading and unloading bays, pavers, streetlights and vegetation.

Despite the six-month shutdown of the island, only the first phase of the project worth P490 million has been completed. It covers 4.12 km from the Cagban port in Barangay Manoc-Manoc to the Elizalde property in Barangay Balabag.

The second phase covering 3.3 km and worth P300 million was started last Jan. 10 and is due for completion on July 28, 2020. It covers the 1.9-km road from the Elizalde property to CityMall in Barangay Yapak at the northern end of the island, where most of the high-end resorts are located. It also includes a 1.4-km span from the Crossing Rotunda to the Tambisaan port.

Travel on the unfinished portion of the main road is rough and dusty. There are traffic jams on hot days and mud on rainy days.

Last May and July, flash floods hit Boracay. Tourists and residents had to wade in floodwaters up to a meter, triggering outrage from the latter.

“The Department of Tourism is brandishing Boracay as a model for sustainable tourism. Maybe sustainable flooding?” an irate resident said.

The BIRMG has appealed for understanding. “We are still not done with all these projects [which] will be completed by the middle of next year,” Bernardino said. “In the meantime … we need to bear with many pains and sacrifices.”

This month, Boracay ranked first in the 2019 Readers’ Choice Award of Condé Nast Traveler’s “30 best islands in the world outside the United States” category.

Tourism Secretary Bernadette Romulo-Puyat said the recognition showed that “the rehabilitation was worth it amid many hardships.”

Puyat said the Department of Tourism was regulating the number of tourists to ensure that it would be within the island’s carrying capacity of 19,215 at any given time and daily arrivals of 6,405.

As of last Sept. 24, the Boracay Inter-Agency Task Force (BIATF) had accredited as compliant to environmental and other requirements 378 accommodation establishments with a total of 14,021 rooms.

From January to September this year, 1,601,450 tourists visited the island, or an average of 5,931 daily, bordering the average daily carrying capacity. The figures are more than the 1,529,895 visitors recorded for the same period in 2017.

Tourists are required to prebook accommodation before they are allowed to proceed to the island from the Caticlan jetty port.

But a number of business operators and residents are questioning the continued policy of allowing stops of cruise ships on the island. They say whatever benefits the visits of cruise ships bring to Boracay are offset by the road and beach congestion.

These visits are also contrary to the government’s announced thrust of regulating tourist arrivals.

“Sustainable tourism entails stopping mass tourism. We must also decide: What kind of tourism and tourists do we want to attract?” a resident who runs a business on the island said, adding:

“Do we want cruise ship tourists, Chinese mass tourism, high-end casino players, or ecotourism? To mix all these kinds of tourism is not healthy and is not working.”

In December 2018, or two months after the island was reopened to tourists, government agencies adopted the Boracay Action Plan—a road map for rehabilitation and development efforts. President Duterte approved the plan last July.

The 152-page plan lays down key areas: enforcement of laws and regulations, pollution control and prevention, rehabilitation and recovery of the ecosystem, and sustainability of island activities.

Implementation of the projects, programs and activities under the plan will cost P25.27 billion until 2022, when Mr. Duterte steps down.

The bulk, or P16.21 billion, will be allotted for infrastructure, and P5.13 billion for pollution control and prevention.

The private sector will finance P15.89 billion, or about 63 percent of the total cost.

The plan includes the creation of an institutional structure that will manage Boracay after the mandate of the BIATF ends in April 2020, unless extended by the President.

It calls for studies on appropriate structures, including one that is led by national agencies with local government participation, or by a self-regulating body led by the tourism services industry similar to the Bali Tourism Board.

There have been previous proposals for the creation of a Boracay Island Council, or an authority that will remove the island from the sole administration of local government units.

Sen. Franklin Drilon has refiled a bill for the creation of a Boracay Development Authority. Aklan Rep. Teodorico Haresco Jr. has authored a related bill for a Boracay Island Council.

The measures would grant supervisory, management and regulatory powers to the multiagency body.

A number of residents and business owners are hoping that the administrative body will be created when the mandate of the BIATF ends.

“At the very least we should have a board composed of experts managing everything on the island professionally, and not attached to politics,” a resident said.

Olga Zubritskaya has been vacationing in Boracay yearly since 2010. She spends four months on the island in every visit, along with her husband or her children aged 7 and 5.

The Moscow resident welcomed the improvements on the island following its closure. She said the roads were wider, making it faster to travel from the port to the hotel.

She also welcomed the clearing of illegal structures on White Beach.

But Zubritskaya frowned on the total ban on beach beds and tables under coconut trees and at the vegetation line.

“I don’t want to lie on the sand even with a towel because I could be bitten by ants, and dogs urinate on the sand,” she said.

She suggested that a limited number of tables and chairs be allowed at a specific time along the vegetation line.

Residents and business owners have also welcomed the major improvements.

“White Beach is now much wider and looks like a beach again, and not a street market,” said an expatriate living in Boracay for decades.

But many tourists, residents and business owners said some of the policies being implemented should be changed because these were affecting the tourists’ experience.

“White Beach might be looking nice and wider, but it is missing many components that international travelers expect: beach beds and sun umbrellas, and also dinner within the vegetation area,” a resident said.