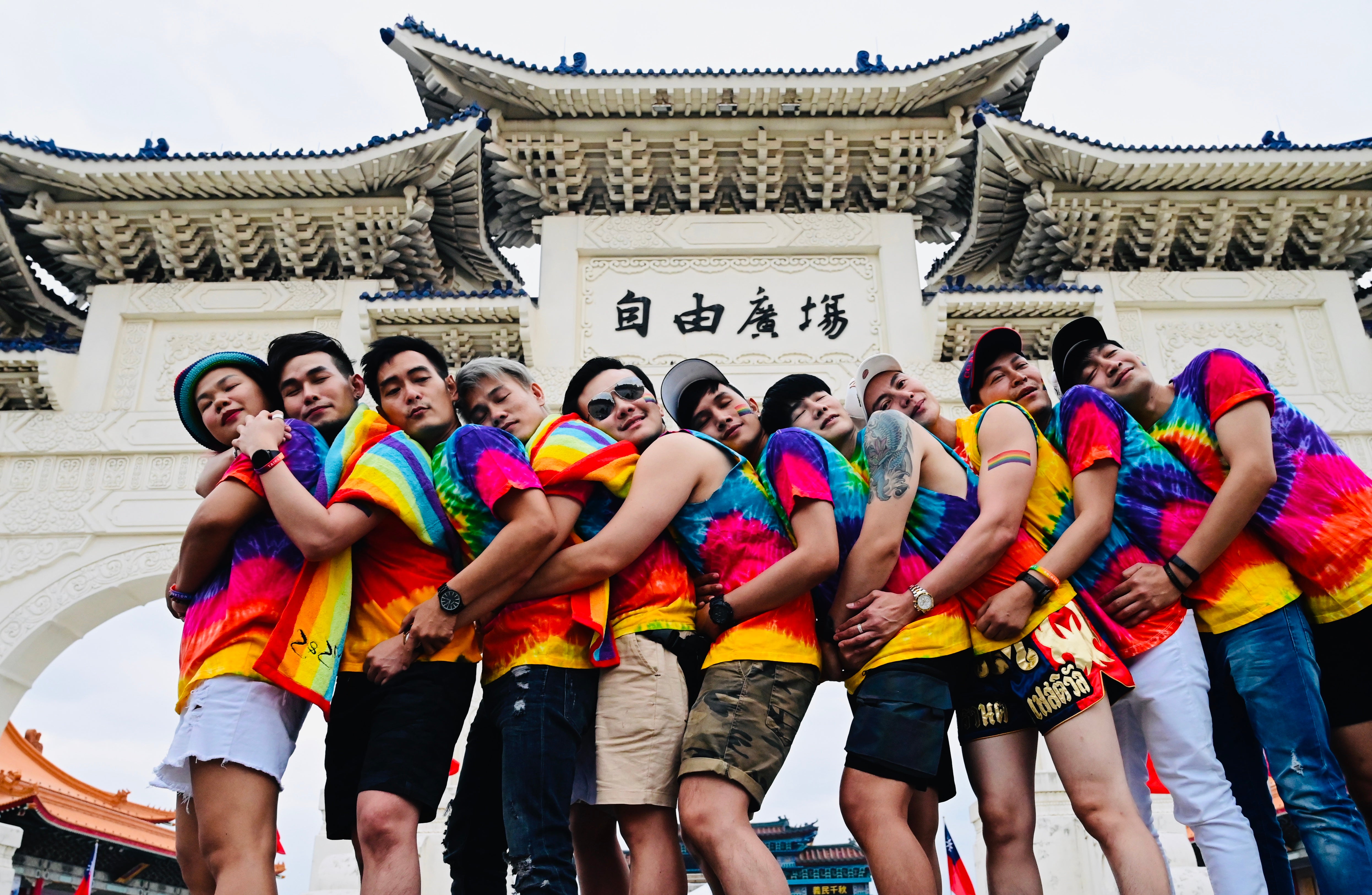 Participants from Thailand pose in front of the Chiang Kai-shek Memorial Hall as they take part in the annual gay pride parade in Taipei on October 26, 2019. – Some two hundred thousand revellers marched through Taipei in a riot of rainbow colours and celebration on October 26 as Taiwan held its first pride parade since making history in Asia by legalising gay marriage. (Photo by Sam YEH / AFP)

TAIPEI — “Taiwan LGBT Pride” attracted more than 200,000 participants on Saturday, calling for the public to embrace the lesbian, gay, bisexual and transgender community, especially now that same-sex marriage has been legalised in Taiwan.

Themed “Together, Make Taiwan Better,” the event has successfully set a new record for the annual Taipei extravaganza that started in 2003 with a few hundred participants. It has since become the largest of its kind in Asia.

The marchers departed early in the afternoon from Taipei City Hall Plaza and walked in a very light mood toward Ketagalan Boulevard in front of the Presidential Office, brandishing rainbow flags and sporting flamboyant costumes.

Among the marchers, hundreds of staff from 37 companies, such as Google, GAP, Unilever and Citibank, to name just a few, and foreign trade representative offices, including the United States, Australia, the European Union, the United Kingdom, France and Belgium, joined the revelers.

The event was organized by the Marriage Equality Coalition Taiwan, the official platform advocating for the passage of marriage equality bills in the Civil Code in 2016. The coalition is comprised of five LGBTQ+ and gender organizations – Awakening Foundation, GagaOOLala, Taiwan LGBT Family Rights Advocacy, The Lobby Alliance for LGBT Human Rights and Taiwan Tongzhi Hotline Association.

Taiwan’s parliament (Legislative Yuan) passed the Enforcement Act of Judicial Yuan Interpretation No. 748 May 17 to allow two people of the same gender aged 18 or older to register a marriage. The act took effect May 24, making Taiwan the first country in Asia to legalize same-sex marriage.

But Cheng Chi-wei, a representative of the Taiwan Tongzhi Hotline Association, told CNA that Taiwan still needs to move forward on the issue of transnational same-sex marriage because, at the moment, Taiwan’s law does not permit same-sex marriage if at least one partner is from a country where such unions are not legal.

For instance, a Taiwan national can’t have same-sex marriages with people from Japan, South Korea, Thailand, Singapore, Malaysia, India, and other areas of Asia, according to pioneering gay rights activist Chi Chia-wei.

Chi, who attended the parade, said that allowing same-sex marriage with people from those countries is the “last mile” on the road to marriage equality in Taiwan.

The Taiwan LGBT Pride Parade was first launched in 2003 and has grown from only a few hundred participants to over 130,000 last year. The event carries a new theme every year, ranging from anti-discrimination to calling for the legalization of same-sex marriage.

According to Ministry of the Interior statistics, a total of 2,155 same-sex marriages were registered in Taiwan as of the end of September, of which 1,461 pairs were women and 694 were men.