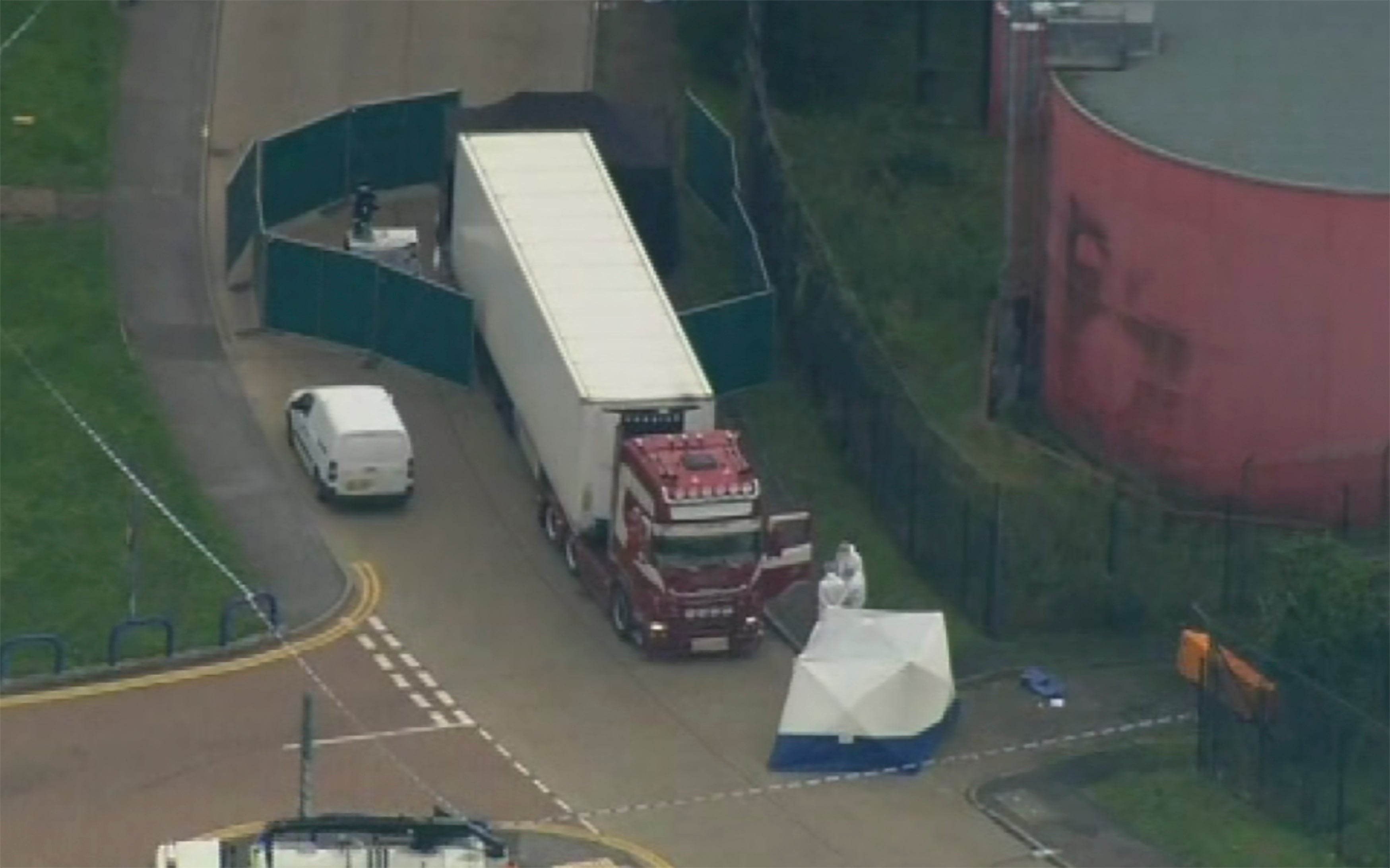 In this Oct. 23, 2019, file photo, police forensic officers attend the scene after a truck was found to contain a large number of dead bodies in Thurrock, South England.  (UK Pool via AP, File)

DO THANH, Vietnam — One family received a final text from their daughter saying she couldn’t breathe and was dying. Another grieving family set up a makeshift altar for their missing daughter who paid $10,000 in hopes of pursuing a career as a nail technician in Britain. A desperate father is searching for his son, who frequently calls home but hasn’t since last week.

They are some of the dozens of families looking for any information about their loved ones following the discovery earlier this week of 39 bodies in the back of a sealed truck in southeastern England. The investigation into the gruesome case is still in the early stages, but British officials have deemed it one of the deadliest cases of people smuggling ever reported in the country.

British police charged the 25-year-old truck driver Saturday with 39 counts of manslaughter and conspiracy to traffic people. Five people are being questioned by police, including the truck driver and three people who were arrested Friday on suspicion on manslaughter and conspiracy to traffic people. Irish police said another man was arrested Saturday in connection with the case.

British police said Saturday they have removed all the bodies from the truck and are awaiting autopsies. Identifying the victims is expected to be difficult and officials said very few documents were found with the bodies. Smugglers normally take the passports of their passengers to obscure their identities, stripping them of their names and giving them new documents when they arrive at their destinations.

Police initially believed the victims were Chinese but later acknowledged that the details were still evolving. The Vietnamese government also announced Sunday its own investigation into the deaths and set up a hotline for families.

That comes after attention shifted to Vietnam Friday, when the family of a 26-year-old Vietnamese woman released text messages suggesting she had suffocated in the truck. Relatives of Pham Tra My told the BBC they had been unable to contact the 26-year-old since receiving a text Tuesday night saying she was suffocating. The mother, center, and other relatives of Bui Thi Nhung sit in front of an altar with Nhung’s portrait inside her home Saturday, Oct. 26, 2019 in Do Thanh village, Nghe An province, Vietnam. Family members fear that Nhung could be among the dozens of people found dead in the back of a truck in England. (AP Photo/Linh Do)

In the village of Yen Thanh in north-central Vietnam, the mother and a sister of Bui Thi Nhung mourned Saturday as they set up an altar for the 19-year-old woman. A family friend in the U.K. told them their relative had died in the tragedy.

Nhung paid an agent thousands of dollars in hopes of finding work at a nail parlor in Britain.

“Many families in Yen Thanh got rich from money sent back by their children working abroad,” said Le Dình Tuan, a neighbor who had gone to her house to check on her mother.

The father of 20-year-old Nguyen Dình Luong fears his son is among the dead. He told The Associated Press he hadn’t been able to reach his son since last week, when the young man told his father he planned to join a group in Paris that was trying to reach England.

“He often called home, but I haven’t been able to reach him since the last time we talked last week,” Nguyen Dình Gia said. “I told him that he could go to anywhere he wants as long as it’s safe. He shouldn’t be worried about money, I’ll take care of it.”

His older brother, Pham Dình Hai, said Luong had a tattoo of praying hands on a cross on his right shoulder. The family said they shared the information with local authorities.

Desperate families are now reaching out to the media, community organizations and acquaintances in the U.K., hoping for any scrap of news. A representative for VietHome, which serves Vietnamese people in the U.K., said it had forwarded to police the pictures of almost 20 people who have been reported missing.

Bernie Gravett, a former Metropolitan Police officer who now advises the European Union on human trafficking, told the BBC that the use of false identification and the sheer numbers of people traveling to Europe make such efforts difficult.

“It’s a cruel stage for the families, because hundreds if not thousands are currently on those routes, so I appreciate we are getting calls from Vietnam saying my loved one is missing and my loved one may be on that lorry (truck), but they could be on another lorry,” he said.

The investigation stretches across Europe and authorities are trying to track the movements of the truck before the victims were discovered early Wednesday morning at an industrial park in Graves, England, a town 25 miles (40 kilometers) east of London.

This is just the latest smuggling tragedy as tens of thousands of people move across Europe in search of security and economic opportunity.

Groups of migrants have repeatedly landed on English shores in small boats after making the risky Channel crossing, and migrants are often found in the back of cars and trucks that disembark from the massive ferries that link France and England.