BORACAY ISLAND, Aklan, Philippines — The recovery of at least five of the nine wetlands here was part of the focus of the Boracay Inter-Agency Task Force (BIATF) when the island was closed to tourists from April 26 to Oct. 25, 2018.

Wetlands help prevent or minimize flooding by acting as a sponge for excess water. Many of Boracay’s wetlands have been covered by developers or used for the illegal dumping of wastewater and solid waste.

Their poor state is considered one of the causes of flooding on the island.

Boracay’s nine wetlands comprise a total of 37.81 hectares. Eight are in forest lands, and one is in an area categorized as alienable and disposable, according to the BIATF-drafted Boracay Action Plan.

According to the report of the Biodiversity Management Bureau of the Department of Environment and Natural Resources (DENR), 548 structures, of which 455 are residential, are encroaching on the wetlands. At least 85 percent of those living there returned to their places of origin during the shutdown of the island.

Eighty-five houses identified by the DENR as illegally occupying Wetland No. 6 in Barangay Manoc-Manoc were demolished in May 2018.

Five of the nine wetlands have been adopted for rehabilitation and development by private companies under separate memorandums of agreement with the DENR.

The projects that are being implemented in phases involve the restoration of wetlands and their development into linear parks or ecotourism areas. 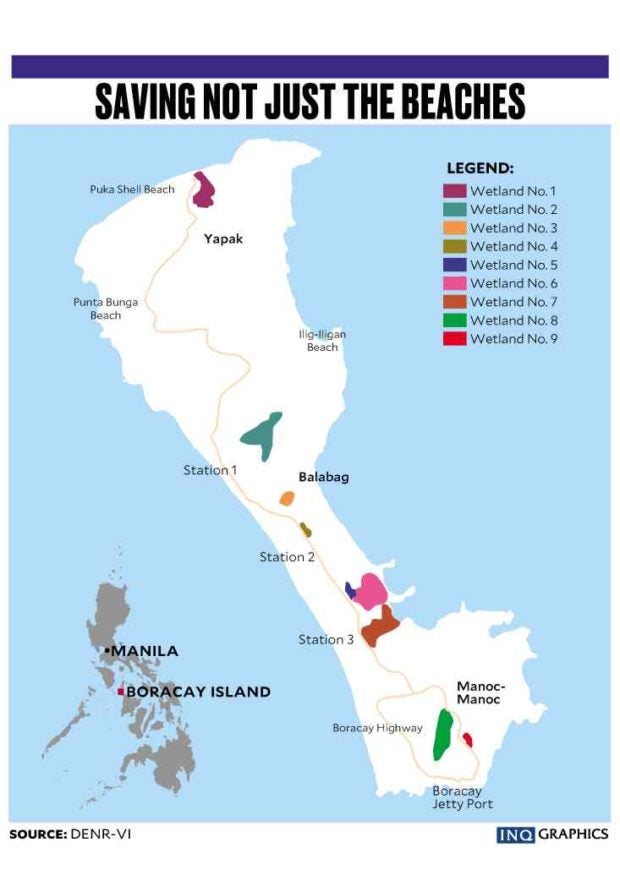 Almost a year after Boracay’s reopening to tourists, most of the 885 structures earlier identified by the DENR as illegally built in forest lands have not been removed.

Natividad Bernardino, general manager of the Boracay Interagency Rehabilitation Management Group, which manages the rehabilitation efforts, said complaints had been filed against the property owners and claimants for unlawful occupation of forest land.

The BIATF has also identified an area on the island that will serve as a permanent relocation site for residents removed from wetlands.

At Bulabog beach on the eastern side of the island, a number of residential and commercial structures identified by the BIATF as violating the 30-meter beach easement have yet to be removed.

Bernardino said that as of Oct. 11, eight of 28 commercial and residential buildings in violation of beach easement had not complied with demolition orders issued by the local government of Malay.

She said the structure owners were contesting the demolition order and had filed an appeal at the Office of the President.

Property owners, including expatriates, are contesting the delineation of easement, saying they were previously granted permits and clearances by national government agencies and the local government.

Many of the owners have invested their life savings in their properties.

On the other hand, the removal of structures encroaching on the easement of the main road from the Cagban jetty in Barangay Manoc-Manoc to CityMall in Barangay Yapak is almost completed.

Bernardino said the remaining overhangs of 19 buildings along the road were being demolished.

The BIATF identified around 1,400 structures encroaching on the island’s road network easement before the island was shut down. At least half were removed when the island reopened.

Bernardino said an inventory would still be conducted for an updated figure of the structures that needed to be demolished.

But some property owners believe that their rights have been violated by the demolition of structures or by government officials pressuring them to raze their properties themselves. They have filed or are planning to file criminal and administrative complaints against personnel of the DENR, Department of Tourism and Department of the Interior and Local Government.

Said a property owner who asked not to be named: “Most of us were afraid because of the heavy-handed measures they imposed during the closure. We have no choice, and we are also protecting our businesses. But they forget that [President] Duterte will not be in power forever.”