New carrier heads to sea for tests amid debate over delays 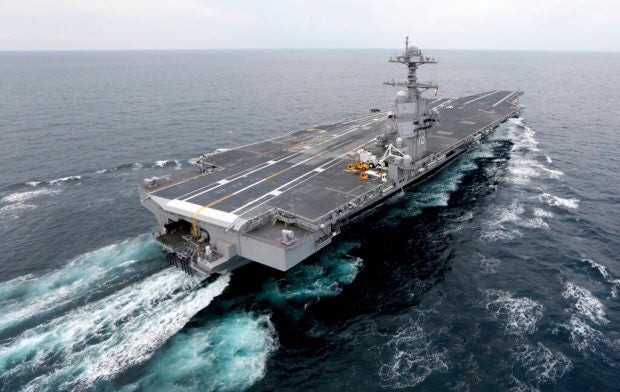 NORFOLK, Virginia — The nation’s newest aircraft carrier left a Virginia shipyard and returned to sea for more tests Friday, just days after fresh concerns were raised in Washington over when the highly advanced ship will be ready for combat.

The USS Gerald R. Ford departed for sea trials in the wake of a public back-and-forth between a congresswoman and U.S. Navy leaders over delays, cost overruns and systems that aren’t fully operational.

For example, not all of the ship’s weapons elevators, which transport missiles and bombs to the flight deck, have been completed.

Speaking at a congressional hearing Tuesday, U.S. Rep. Elaine Luria said the Ford should have been deployable in 2018 but may not be ready until 2024.

“I just truly don’t feel this is a great investment as a taxpayer — $13 billion on a ship that’s going to deploy six years past its original design timeline,” said Luria, a Navy veteran and Democrat whose district includes the world’s largest Navy base on Virginia’s coast

Luria added later that six aircraft carriers at the base aren’t currently deployable for various reasons.

“We basically invested $13 billion on a nuclear-powered berthing barge …” she said of the Ford.

James F. Geurts, an assistant secretary of the Navy, responded during the hearing that the Ford should be ready before 2024.

The next day, Navy Secretary Richard V. Spencer said during a talk at the Brookings Institution that Luria disparaged a ship that’s helping the Navy develop new technology.

“The way we went to the moon was because the country was behind this, to get us to the moon with new technologies,” Spencer said. “We’re going to work this out.”

The new carrier is designed to carry a wider variety of planes, potentially including unmanned aircraft, and operate with several hundred fewer sailors. A new electromagnetic system for launching planes is supposed to increase flying missions by a third.

The launch system drew criticism from President Donald Trump, who told Time magazine in 2017 that the system “costs hundreds of millions of dollars more money and it’s no good.”

The Navy declined to comment on the president’s statement. But officials said last year that the Ford has launched and recovered hundreds of aircraft and will support “full intensity” operations by its first deployment.

Navy officials and some experts have said problems are expected to arise — and be worked out — on the first ship in a new class. Two more Ford-class carriers are under construction, and more could be built.

Bradley Martin, a senior policy researcher at the RAND Corp. and a retired Navy captain, said in an interview Friday that such arguments between Congress and the military are nothing new.

“I don’t have a whole lot to criticize in terms of Navy’s management of the Ford-class carrier program,” Martin said.

But he added: “I think perhaps the secretary was a little off point trying to say to the representative that she should be trying to help more. Her job is to ask. She’s doing exactly what she’s supposed to do.”