Grimmer weather seen in next 10 years 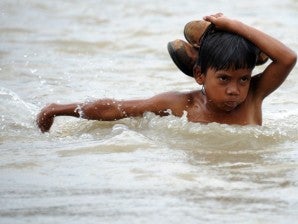 DEADLY RIVER A boy carrying his shoes crosses the Kapay river, one of the three rivers that overflowed during the path of Tropical Storm “Sendong” in a remote area in Iligan City. Tens of thousands of flood survivors queued for their Christmas meal in evacuation centers December 25, holiday spirits doused by thoughts of more than 2,000 dead or missing kin. AFP

The country hasn’t seen the last of extreme weather events.

Climate projections for 2020 and 2050 by the weather bureau are even grimmer: The dry season would be drier and the wet season would be wetter, and the damage to crops and water sources would be far-reaching.

“But the weather is changing now,” Sering said in an interview in the aftermath of the destruction wrought by Tropical Storm “Sendong” in Northern Mindanao.

“If we say we are racing against time, then technically, we can say that,” she added.

In fact, the country is in the midst of an environmental turmoil and politicians should address this with urgency, said Rosa Perez, a climate scientist at the Manila Observatory.

“They think it is a future problem, but it is happening now,” said Perez, lead author of a UN report on climate change adaptation and sustainability.

Presidential spokesperson Edwin Lacierda, reacting to a Philippine Daily Inquirer report that Cabinet officials had failed to heed warnings of an environmental catastrophe, said that the administration in its early days was “doing a lot of clearing of the land mines,” referring to allegations of corruption against the previous Arroyo administration.

“The situation right now has made it emphatic for us … as well as for the local government units to seriously look into the hazard areas,” Lacierda said.

During the 2020-2050  period, there would be less rainfall during summer, “making the usually dry season drier,” the Philippine Atmospheric Geophysical and Astronomical Services Administration (Pagasa) said in its 2011 report, “Climate Change in the Philippines.”

Rainfall, however, is likely to increase during the rainy season from June to August, and then from September to November, “making these seasons wetter,” according to the report released this month.

Hence, these areas would be hit by droughts and floods, Pagasa said.

Regions or provinces, where rainfall drop is projected, would experience “water stress” which would adversely impact on agriculture, livelihood, health and human settlement.

“Large decreases in rainfall and longer drier periods will affect the amount of water in watersheds and dams which provide irrigation services to farmers, especially those in rain-fed areas, thereby limiting agricultural production,” Pagasa said.

Decreased rainfall would also impact on energy power produced by dams, and as a whole, affect the country’s energy sufficiency program. That’s why there’s a need to revisit the design of dams to allow them to adapt to the projected longer drier periods, the weather bureau said.

In areas where rainfall is projected to intensify during wet periods, flooding could occur and pose danger to homes and infrastructure in geologically weak areas.

Pagasa projected that rainfall would decrease in most parts of the country during summer.

Rainfall, however, would increase in most areas of Luzon and Visayas during the southwest monsoon in the months of June, July and August until September, October and November, and during the northeast monsoon in December, January and February, it said.

Pagasa projected that in 2020 and 2050, it would get warmer in the entire archipelago and more intensely in the summer months.

The highest temperature spike is projected to occur during summer from March to April to May. The number of days with maximum temperature exceeding 35 degrees Celsius would increase in 2020 and 2050, it said.

“Hot temperatures will continue to become more frequent in the future,” the weather bureau said in the Millennium Development Goal Fund-financed report.

The report will be helpful to local government units because it includes data on seasonal temperature increases, seasonal rainfall change and total frequency of extreme events in 2020 and 2050 for all regions and provinces.

To adapt to this, Pagasa proposed a wide range of measures for local government, including rational management of water, upgrade or rehabilitation of dams, changes in cropping patterns, setting up rainwater collection facilities and early warning systems.

The climate change projections were based on climate models. To generate projections of rainfall change and temperature increase in 2020 and 2050, the team used the regional climate model (RCM) of the Precis (Providing Regional Climates for Impact Studies).

The RCM was developed by the UK Met Hadley Center to facilitate the impact, vulnerability and adaptation assessments in developing countries.

But Sering said the budget for the programs only came this year.

She also said that the programs had yet to be communicated to the majority of officials at the front line. For example, some local officials who have received geohazard  maps do not understand how to use these, Sering said.

“It’s very technical for them. There should be a massive reorientation,” she said. “All of these would be solved if there is political will.” With a report from Norman Bordadora