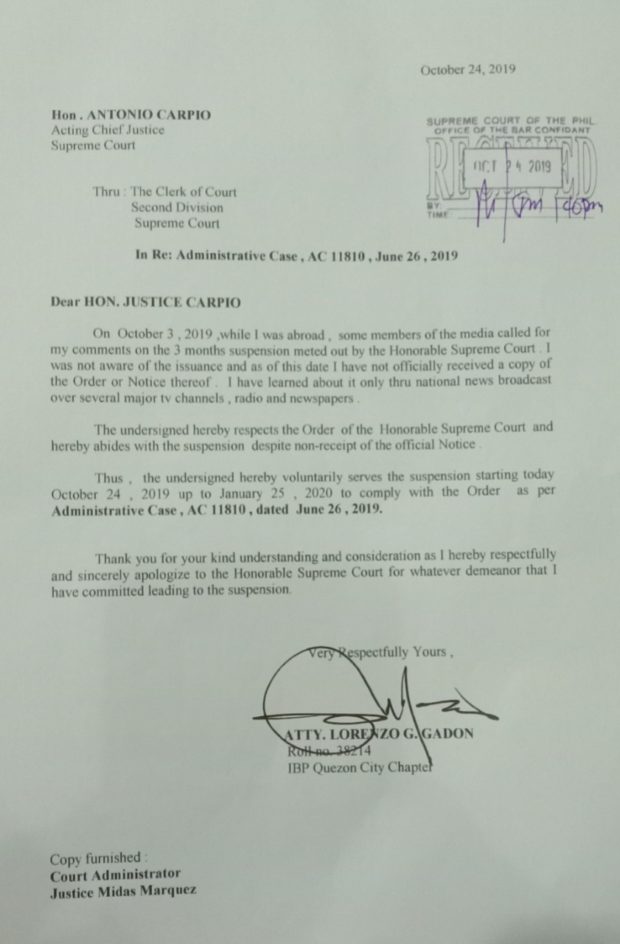 MANILA, Philippines – Controversial lawyer Lorenzo “Larry” Gadon on Thursday said he is voluntarily suspending himself from the practice of law even if he has yet to receive the Supreme Court order suspending him for three months.

Gadon personally went to the Supreme Court and submitted a letter to Senior Associate Justice Antonio Carpio informing him of his decision to voluntarily serve the three-month suspension.

He said he learned of the suspension order through media reports and messages from the media.

“On Oct. 3, 2019, while I was abroad, some members of the media called for my comments on the three months suspension meted out by the Honorable Court. I was not aware of the issuance and as of this date, I have not officially received a copy of the Order or notice thereof,” read Gadon’s letter.

Gadon thanked the Supreme Court for their understanding and apologized “sincerely…for whatever demeanor that I have committed leading to the suspension.”

Gadon, known as the “anti-bobo crusader,” counsel for Peter Joemel Advincula and who initiated the impeachment case against former chief justice Maria Lourdes Sereno, was suspended for violating the Code of Professional Responsibility for “abusive and offensive” language. His suspension is in connection with a 2009 complaint filed by a dermatologist whom Gadon allegedly unilaterally suspended following a complaint by a patient.

Earlier, Gadon thanked Carpio, the chair of the high court’s second division that issued his suspension order, for being objective and considerate.

He said his suspension is nothing compared to being kicked out as chief justice of the Supreme Court, referring to Sereno.

Gadon added that he was amused because the news about his suspension became “a toast of national news when other lawyers who get disbarred or suspended for two years did not merit any attention by the public.”/ac